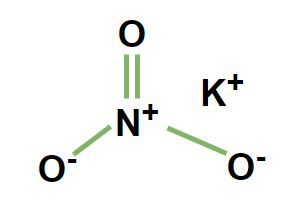 Question 1: How would you separate lead iodide from potassium nitrate?

The potassium iodide and lead nitrate are added to opposite sides of a Petri dish that contains water. Both ionic compounds will separate into their individual ions. Once ions are separated, they are hydrated by the water in the Petri dish, which allows them to be carried in the solution.

Question 2: Why is potassium electrically neutral?

Question 3: How is potassium nitrate used as fertilizer?

Question 4: How can nitrogen get into soil?

The decomposition of plants and animals adds nitrogen to the soil. Then, the bacteria present in the soil itself convert the nitrogen for the use of plants. Later, plants grow using the sme nitrogen. Again, humans eat the same plants adding nitrogen and later returning it to the soil, hence, the cycle goes on.

Question 5: What are the facts about oxygen?

Animals and plants require oxygen for respiration. Plants’ photosynthesis drives the oxygen cycle. Oxygen gas is essential for life, too much of it can be toxic. Oxygen gas is colorless, odorless, and tasteless. Oxygen is a nonmetal. It is mainly used in steel, plastics, glass productions, and stone products and is also used in rocket propulsion.

Question 6: What are occurrences of the potassium nitrate?

Potassium nitrate occurs as crusts on the surface of the Earth, on walls and rocks, and in caves and it forms in certain soils in Spain, Italy, Egypt, and India. The deposits in the great limestones caves of Kentucky, Virginia, and Indiana probably.