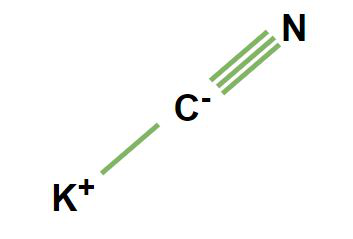 Question 1: Why is Potassium Cyanide ( KCN) used instead of Hydrogen Cyanide (HCN)?

The product of the reaction is a hydroxy nitrite. KCN is often used as the reagent to provide the nucleophile instead of HCN. This is because HCN is hard to store as gas and reacts to produce dangerous byproducts.

Question 2: What are the differences between Potassium Cyanide ( KCN) and Sodium Cyanide (NaCN)

Potassium cyanide is a salt of a strong base and weak acid. This compound is water-reactive which produces a strong base that reacts violently and is corrosive in nature.

Question 4: What are the types of carbon?

There are three types of carbon they are,

Question 5: How to remove cyanide from food?

Sun-drying is the solution to remove cyanide from food. Soaking or boiling alone in removing cyanide. Sun-drying eliminates more cyanide than oven drying because of the prolonged contact time between linamarase and the glucosides in sun drying.

Yes, it is harmful to health. It is a potent inhibitor of cellular respiration. A person suffers from headaches, vomiting, and dizziness which can be harmful to human health. The person may also lose consciousness and brain death eventually follows.