Potassium has the symbol K. Its atomic number is 19. It’s electron configuration is 1s2 2s2 2p6 3s2 3p6 4s1. Belonging to the fourth period, first group, it is a silvery-white element. It can be found naturally as minerals and salt. It helps your nerves function and muscles contract. It is most commonly used for treating and preventing low potassium levels. Potassium was discovered by Sir Humphry Davy in the year of 1807. Chlorine has the symbol Cl. It’s atomic number is 17. It’s electronic configuration is 1s2 2s2 2p6 3s2 3p5. Chlorine is commonly used as an antiseptic to kill bacteria and is also used for drinking water safe. Chlorine is used in many industrial processes, paper products, plastics, textiles, and medicines. Oxygen has the symbol O. Its atomic number is 8, and its electron configuration is 1s2 2s2 2p4. It is a member of the chalcogen group in the periodic table. It is an odorless, colorless, tasteless, diatomic gas consisting of 21% of the atmosphere. It plays a critical role in respiration. The primary applications of oxygen include refining, melting, and manufacturing steel along with other metals.

Potassium Chlorate is an inorganic compound it contains one atom of potassium, one atom of chlorine, and three atoms of oxygen, and its molecular formula is KCLO3. It is a strong oxidizing agent. It looks like a white crystalline solid. In industrial use, it is the second most chlorate. It is crystalline salt with a cooling saline taste that is used especially in veterinary medicine as a mild astringent. It is a more potent oxidizer than potassium perchlorate. It is commonly used as an oxidizer in pyrotechnics. The potassium chlorate is commonly made from household bleach and salt substitute.

Potassium Chlorate is an inorganic compound it contains one atom of potassium, one atom of chlorine, and three atoms of oxygen, and its molecular formula is KCLO3. 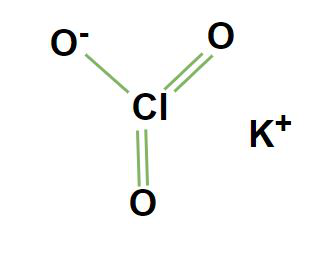 Question 1: Why is potassium chlorate used in matches?

Question  3: What are the uses of chlorine?

Chlorine has a variety of uses. It is used as a bleaching agent during the production of cloth and paper. It is used to disinfect water and is part of the sanitization process for sewage and industrial waste. Chlorine is dissolved in water so it is used in household bleach

Question 4: What are the facts and uses of oxygen?

Oxygen is an odorless, colorless, tasteless, diatomic gas consisting of 21% of the atmosphere. It plays a critical role in respiration. Oxygen is a very reactive element that likes to bind with other elements and easily forms compounds such as oxides is called oxidation. Oxygen is used in the production of steel plastics and textiles, welding, and cutting of steel and other metals.

Question 5: What is potassium called on blood testing?

Question 6: Potassium Chlorate consists of how much percentage of potassium?

Potassium Chlorate is an inorganic compound it contains one atom of potassium, one atom of chlorine, and three atoms of oxygen. It is the most widely applied potassium fertilizer because of its relatively low cost and because it includes more potassium than most other sources. It contains 50 to 52 percent of potassium.