Potassium Bromate is a widely used form of bromine with the chemical formula KBrO3. Taking the form of white crystals or powder is the characteristic of potassium bromate. It is a strong oxidizing agent. It is an ionic compound or salt which is formed of K+ and BrO3–. It is an inorganic compound. It is also called bromate. With the high melting point, it is also water-soluble. It is a moderately toxic compound. It causes vomiting, diarrhea, respiratory stimulation, and renal injury. 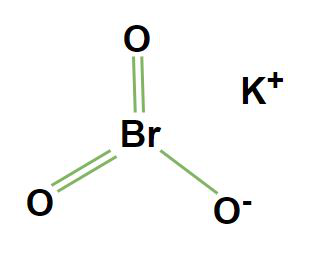 Question 1: What is the bromination method?

This procedure basically consists of the oxidation of hydrobromic acid by hydrogen peroxide without the use of any transition metal catalyst.

Question 2: What is bleached and Bromated flour?

This process is known as bleaching and many refined white flours on the market, especially cake flours are bleached, added to flour to strengthen the dough structure giving higher rising bread in the oven.

Question 3: What elements does oxygen bond with?

Oxygen is reactive and will form oxides with all other elements except the noble gases helium, neon, and krypton. So it can be said that oxygen mostly bonds with all elements.

Question 4: What is the difference between bromination and chlorination?

Question 5: What are the sources of Potassium Bromate?

Potassium Bromate can be found in some the foods like buns, bread, flours, pizza dough, and pretty much anything that contains flour. It is an oxidizing agent and one of the best dough improvers in the baking industry.

Question 6: What are the causes of  Potassium Bromate?

The substance is a probable carcinogen, and it is linked to the probability of causing cancer in human beings. since it has been shown to cause kidney, thyroid, and gastrointestinal cancer in animals.