One comes across various forms of sound in its daily lives, and everyone is well-equipped with a system to recognize various types of differences in the sound pattern. When a mother speaks to her child, her accent is distinct from that of the child. And all these variations are due to a mechanism called pitch and loudness of sound which always differentiates a person’s voice from another one. That’s why your voice is so unique in your whole class, family, and locality. However, a sound that closely resembles another or imitation also comes under this phenomenon. Let’s look at the loudness of sound, the pitch of the sound, and the differences between the two.

One can hear all kinds of sounds in everyday life, like crying, yelling, and laughter and this isn’t limited to people. Animals make sounds as well, but they are not the same as human voices. Is the sound of a drum similar to that of a flute? So, what’s the difference between the two? Let’s look at some fundamental properties of sound to understand this.

There are main four characteristics of sound waves, explained briefly below as:

Loudness of the Sound 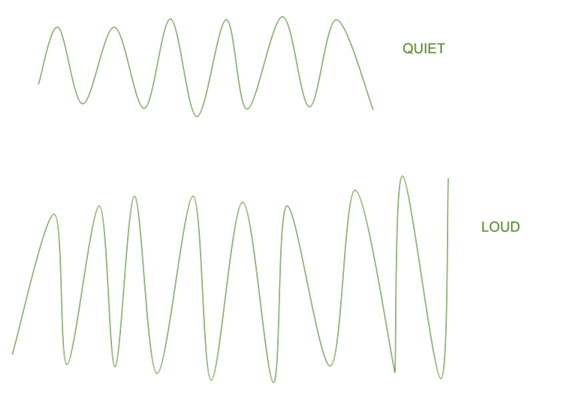 e.g.: If the amplitude becomes twice, the loudness will be 4 times.

Pitch of the Sound 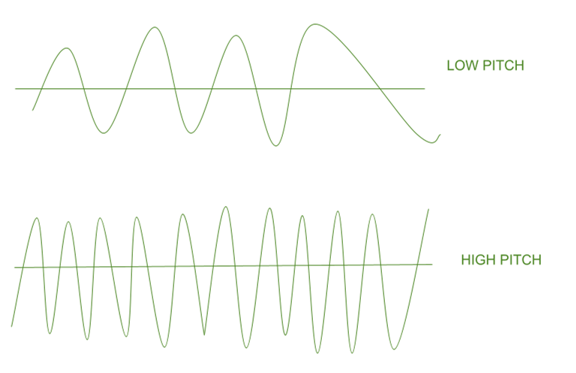 Pitch defines the quality of a sound by determining its frequency scale. It is also known as shrillness. If the frequency of vibration is higher it means the sound is more shrill. But if the sound is of low frequency we will that the sound has a low pitch. For instance, it can be noticed that a woman’s voice is of a high pitch than the man’s voice. The following are the important points related to the pitch of the sound:

Difference between Pitch and Loudness

Problem 1: If the amplitude of a wave is doubled, what will be the effect on its loudness?

Since, it is known that, Loudness α (Amplitude)2.

Therefore, if amplitude is doubled then the loudness becomes 4 times.

Problem 2: What are the characteristics of musical sound?

The three characteristics of a musical sound are:

Problem 3: Why is the loudness of sound heard by a plucked wire increased when mounted on a soundboard?

When a wire mounted on a sound board is plucked, the surface area of vibrating air increases and sends greater amount of energy. So the amplitude of vibration is large and louder is the sound heard.

Problem 4: State three factors on which loudness of sound heard by a listener depends?

The various factors on which loudness of sound heard by a listener depends are:

Problem 5: Name and define the characteristic which enables one to distinguish two sounds of the same loudness, but of different frequencies, given by the same instrument.

The characteristic which enables one to distinguish two sounds of same loudness, but of different frequencies, given by the same instrument is pitch. The sensation of a frequency is commonly referred to as the pitch of a sound. A high pitch sound corresponds to a high frequency and a low pitch sound refers to a low frequency sound wave.