Growth is the constant, unavoidable expansion of an organism’s size. All organisms have this characteristic, which is accompanied by a number of metabolic processes. Speeds would sprout, grow into a seedling, and then mature into an adult plants. Plants exhibit unending development. The changes that occur throughout a plant’s life cycle are collectively referred to as development. Plants respond to their surroundings in a variety of ways, creating a variety of structures. In contrast to adult plants, immature plants have varied leaf structures.

The sum of the differentiation and also the growth would result in development. Both innate and external factors control it.

Based on their roles inside a living plant body, the PGRs can be generally split into two classes. PGRs that participate in growth are one group encouraging processes like cell growth, cell division, pattern formation, tropic expansion, floral, berry, and seed development. These are additionally known as plant growth stimulants, such as auxins, gibberellins, and cytokinins. Groups which is another PGR are crucial for plant growth. responses to biotic and abiotic stressors and wounds. Those are engaged in a variety of actions that restrict growth, such as dormancy abscission, too. This group includes PGR abscisic acid. the vaporized groups could fit PGR (ethylene), but it primarily acts as an inhibitor of development efforts. 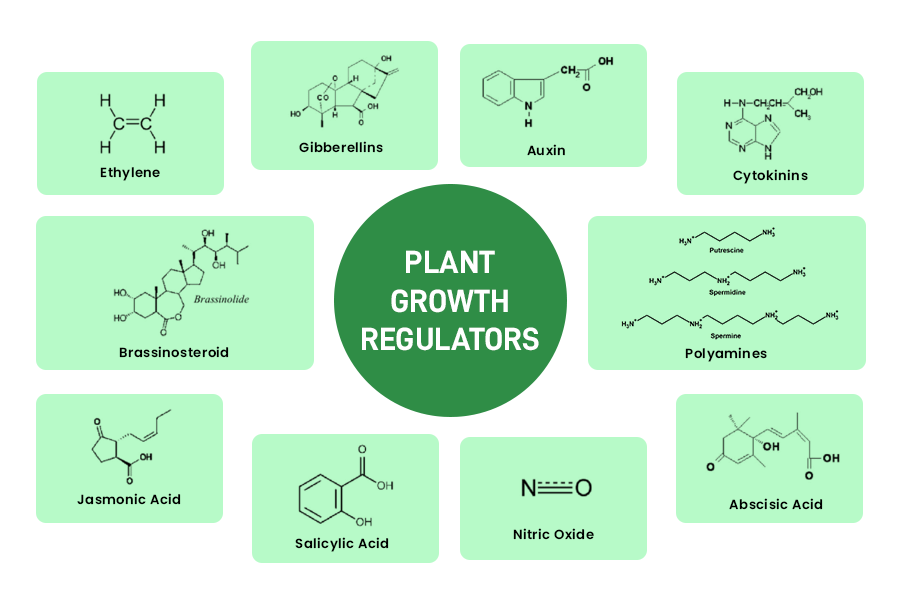 In the beginning, human urine was used to separate auxins (from the Greek ‘auxin’: to grow).

Indole-3-acetic acid (IAA) and other naturally occurring and synthesized substances with specific growth-regulating properties are referred to as “auxins.” properties. They are typically created by the stems’ expanding apices, roots from which they spread to the areas where they act.

Plant regulators are divided into 2 types according to their working mechanism:

These are those hormones that promote the growth of the plant. The promoter hormones include:

These are those hormones that inhibit the growth of the plant. The promoter hormones include:

Question 1: Plant growth regulators: what are they?

6 Phytohormones or plant hormones, commonly known as plant growth regulators. They are a collection of organic substances that work by regulating and altering plant physiological processes like growth, development, and mobility.

Question 2: Which regulator of the growth of plants is utilized to control and encourage the sugarcane crop’s maturation?

Sucrose would be stored in plants, ethylene, the ripening hormone in plants, aids in the maturation of sugarcane crops.

Question 3. Which hormone would be in the form of gas?

Ethylene would be gaseous in nature.

Question 4: Which play an essential role in phototropism?

Question 5: Which would play an essential role in killing weeds?