Difference Between Phylum and Class

Taxonomic hierarchy is also called Linnaean hierarchy because it was first proposed by Linnaeus. Hierarchy of categories is the classification of organisms in a definite sequence of categories (taxonomic categories) in a descending order starting from the kingdom and reaching up to species or in ascending order from species to kingdom. The hierarchical categories into which every organism gets classified are discussed in many details. In this article, we will focus on two major taxonomic categories Phylum and Class. These are two out of the various taxonomical categories used by taxonomists. The highest taxon is Kingdom. There are five kingdoms in the general system of classification. Each kingdom is divided into various phyla (term used for animals) or divisions (term used for plants). For example, Kingdom Animalia is divided into phyla like Porifera, Cnidaria Ctenophora, Platyhelminthes, Aschelminthes, Annelida, Arthropoda, Mollusca, Echinodermata, Hemichordata, and Chordata. Each phylum or division is divided into various classes. E.g: Phylum Chordata has various classes like Cyclostomata, Chondrichthyes, Osteichthyes, Amphibia, Reptilia, Aves, and Mammalia.

There are about 1.7-1.8 million species identified and studied by biologists now and many more are yet to be discovered. The biodiversity on earth is truly immense. This necessitates us to develop systems to make their study easier. There are 7 obligate and many smaller taxons into which organisms are classified. Organisms in the lower taxon share more similarities amongst themselves. As we move higher up, the number of common characteristics decreases. These are arranged in descending order as follows: 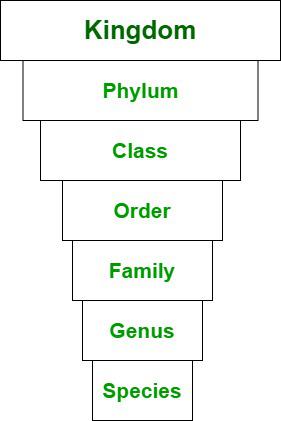 It is a taxonomic category located below kingdom and above class in the system of classification. For plants, algae, and fungi the term division is preferred over phylum. For animals, the term phylum is used. The word phylum was coined by Ernst Haeckel in 1866. It is derived from the Greek word phylon which is related to the word phyle meaning tribe/clan. Phylum is a universal taxonomic category i.e. it is applicable to all organisms animals, plants, fungi, etc. Kingdom Animalia contains about 31 phyla, kingdom Plantae contains about 14 phyla and kingdom Fungi contains about 8 phyla. There are five major kingdoms Monera, Protista, Fungi, Plantae, and Animalia. Each kingdom is divided into various phyla/divisions like:

Kingdom Protista: There are nearly over 15 phyla in this kingdom, some of which are:

Kingdom Fungi: There are 8 different phyla in this kingdom namely:

Kingdom Plantae: They have five phyla/divisions:

Kingdom Animalia: This is an extensive kingdom with over 30 animal phyla. Some of the phyla are:

It is a taxonomic category located between phylum and order in the system of classification. This term was first introduced by the French botanist Joseph Pitton de Tournefort in his classification of plants in 1694. This taxonomic category includes related orders. Class Mammalia includes orders such as Primata and Carnivora. Each phylum is divided into various classes like:

Phylum Chordata: It has many classes, some of which are:

Phylum Angiospermae: It is divided into two classes:

FAQs on Class and Phylum

Question 1: State the types of taxonomy.

Question 3: Who is the author of the book Systema Naturae?

Carolus Linnaeus is the author of the book Systema.

Question 4: For which taxonomic category is the suffix opsida used?

Suffix opsida is used in class category of taxonomy.

Question 5: What is the difference between class and phylum?