Animals are those organisms which are eukaryotic, multicellular and heterotrophic in their mode of nutrition. Animal cells do not have cell walls. Except for a few, most animals are mobile. Multicellular animals are often called metazoa and have been divided into two branches: Parazoa and Eumetazoa. In Parazoa, the animal’s body is formed of loosely aggregated cells. These animals have poorly differentiated tissues and have no organ or digestive cavity (e.g., sponges). However, in Eumetazoa, the cells are properly arranged into tissues and organs. Their digestive track is the mouth but with or without an anus.

Eumetazoa is further classified on the basis of

Those animals which have two germ layers in the embryo are called diploblastic animals and those having three germ layers are called triploblastic animals. Further classification of animals is on symmetry, on basis of mouth origin, based on the presence or absence of body cavity or coelom. Animals do not have cell walls and chlorophyll. The central vacuole is absent. They store food as glycogen and fat. Animals can transmit impulses due to the presence of nerve cells. Sponges do not have nerve cells. Centrioles are present. 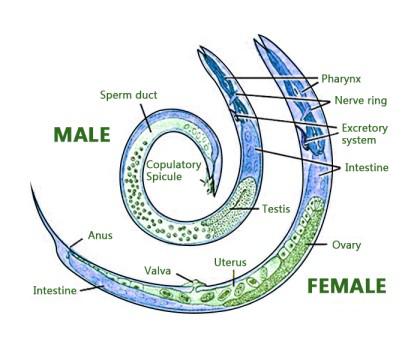 Ascaris lumbricoides is an endoparasite of the small intestine of human beings. It is more common in children. Ascaris shows sexual dimorphism. Male is smaller than female. The posterior end of the male is curved. A cloaca and two equal spicules projecting through the cloacal aperture are present in male Ascaris. Two equal spicules project through the cloacal aperture. Female Ascaris has a separate anus and genital aperture. Spicules are absent in female Ascaris. Adult Ascaris lives for about 9 to 12 months in the host.

Ascaris is both ammonotelic and ureotolic. If free oxygen is available in traces, Ascaris is a facultative anaerobe.

Amphids are two pits upon ventro- lateral lips of the mouth. These are chemoreceptors. Phasmids are present on lateral sides of the body in the posterior region and are glandulosensory in nature.

The whole excretory system of canals is formed of a single highly elongated and complicated giant cell. This cell is called Renette cell. Its nucleus is located upon the left longitudinal canal close to the connecting bridge. Three other smaller nuclei are also found, one upon connecting bridge and two upon terminal duct.

It is found as an endoparasite in the small intestine of human beings.

Ancylostoma duodenal(Hookworm) causes acute anaemia. It also retards the growth of the body in children. The disease is called ancylostomiasis. Its infection is more prevalent in rural areas where people move bare-footed and hygiene is neglected.

Adult Wuchereria bancrofti lives as an endoparasite in the lymphatic vessels and lymph nodes of human beings(primary host). The mosquito(certain species of Cupex and Aedes mosquitoes) is the intermediate host. Thus its lifecycle is digenetic.

Filaria is viviparous. In the lymph glands, the juveniles develop into adults. The accumulation of these worms blocks the lymphatic system resulting inflammation of lymph gland and other pathological conditions. In some cases, the obstruction of lymph vessels may cause a serious disease known as elephantiasis(=Filariasis) in the legs and arms.

It occurs in the subcutaneous tissue of man. When the host comes in contact with cold water, the female worm found below the skin, releases larvae in the water. The larvae penetrate the body of cyclops, a freshwater crustacean, which is the intermediate host of the guinea worm. When the infected cyclops is taken in by man with water, the larvae escape where they become adults. The guinea worm causes itching, diarrhoea, nausea, vomiting and eosinophilia due to its toxic secretions in the human body.

Aschelminthes are known to cause various diseases in plants, animals and also humans. Some of the diseases are:

Question 2: Which is the causal organism for the disease ascariasis?

Ascaris is an endoparasite which causes asacariasis.

Question 3: What are the symptoms of ascariasis?

Fever, abdominal swelling, abdominal discomfort, and abdominal cramping are the symptoms of ascariasis.

Question 4: Give examples of Aschelminthes.

Ascaris, Wuchereria, and Dracunculus are some of the examples of phylum aschelminthes.

Question 5: Write the difference between male Ascaris and female Ascaris.