Animals are those organisms that are eukaryotic, multicellular, and heterotrophic in their mode of nutrition. Animal cells do not have cell walls. Except for a few, most animals are mobile. Multicellular animals are often called metazoa which has been divided into two branches: Parazoa and Eumetazoa. In Parazoa, the animal’s body is formed of loosely aggregated cells. These animals have poorly differentiated tissues and have no organ or digestive cavity (e.g., sponges). However, in Eumetazoa, the cells are properly arranged into tissues and organs. Their digestive tract is the mouth but with or without an anus. Eumetazoa is further classified on the basis of

Animals do not have cell walls and chlorophyll. The central vacuole is absent. They store food as glycogen and fat. Animals can transmit impulses due to the presence of nerve cells. Sponges do not have nerve cells. Centrioles are present. 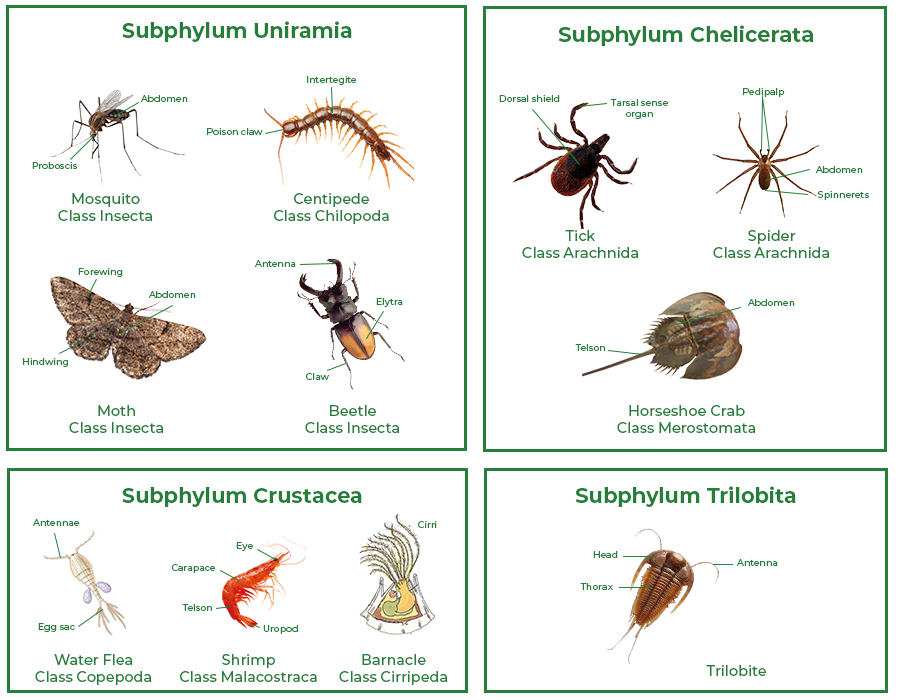 This is the largest phylum of Animalia. Hereunder, are the distinguishing features of Arthropoda:

Chilopoda and Diplopoda were earlier included in a single class Myriopoda.

Differences between Annelids and Arthropods

Phylum Arthropoda- The Animals with Jointed Feet is the largest phylum of Arthropoda. The body consists of the head, thorax, and abdomen. There is a distinct head. They have jointed appendages.

Question:2 What are the five main classes of arthropods?

Onychophora, Crustacea, Myriapoda, Insecta, and Arachnida are the main classes of Arthropoda.

Question:3 Where do most arthropods live?

Arthropods are found in virtually every known marine (ocean-based), freshwater, and terrestrial (land-based) ecosystem, and vary tremendously in their habitats, life histories, and dietary preferences.

Question:4 What is the study of Arthropods called?

Arthropodology is known as the study of Arthropods.

Question:5 Give examples of Arthropods.