The term flora refers to all plant life that is present in a certain area or period, typically the naturally existing (native) plants. In some cases, the terms “gut flora” and “skin flora” are also used to refer to bacteria and fungus. 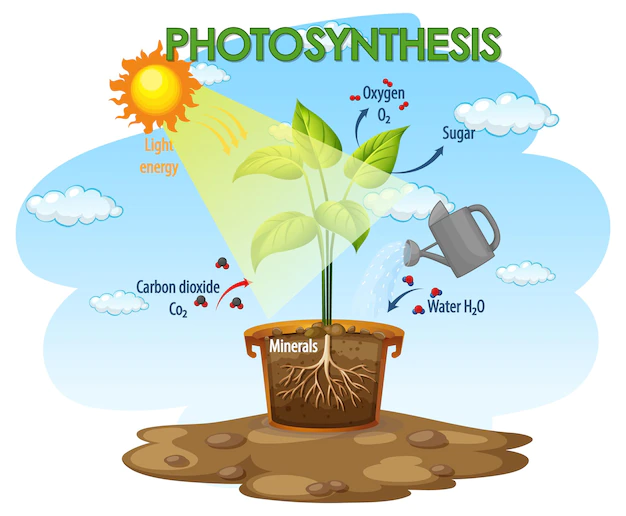 The conversion of sunlight, carbon dioxide (CO2), and water into food (sugars) and oxygen are known as photosynthesis. This process is employed by plants, algae, and some microorganisms. In order to assist in the creation of clean fuels and renewable energy sources, the general principles of photosynthesis are examined along with associated studies.

According to “Anoxygenic Photosynthetic Bacteria” by LibreTexts, anoxygenic photosynthesis utilises electron donors that are not water and does not result in the production of oxygen (opens in new tab). Green sulphur bacteria and phototrophic purple bacteria are common examples of bacteria that exhibit this mechanism.

Despite the fact that both types of photosynthesis are intricate, multistep processes, the entire procedure can be neatly condensed into a chemical equation.

The oxygenic photosynthesis equation is:

Here, light energy is used to mix 12 molecules of water (H2O) with six molecules of carbon dioxide (CO2). As a result, six molecules each of oxygen and water are formed, as well as one molecule of a carbohydrate (C6H12O6, or glucose).

Similarly, a single generalised formula can be used to express all anoxygenic photosynthesis reactions:

Through tiny holes on their leaves known as stomata, plants take in CO2 from the atmosphere and release it along with water and oxygen. The guardians of gas exchange between a plant’s interior and the outside world are stomata.

Stomata release oxygen and allow water vapour to escape while they are open, allowing CO2 to enter the system. Stomata close in an effort to lessen the amount of water lost, but doing so prevents the plant from absorbing CO2 for photosynthesis. For plants that grow in hot, dry climates, this trade-off between CO2 intake and water loss presents a unique challenge.

How do Plants Absorb Sunlight for Photosynthesis?

According to the science education website Nature Education, chlorophyll is the principal pigment used in photosynthesis and gives plants their green hue. In order to utilise red and blue light for photosynthesis, chlorophyll absorbs them while reflecting green light. According to Harvard University’s The Harvard Forest, because chlorophyll is a huge molecule and requires a lot of resources to produce, it degrades toward the end of the leaf’s life and most of the pigment’s nitrogen (one of the building elements of chlorophyll) is resorbed back into the plant. Other leaf pigments like carotenoids and anthocyanins start to reveal their real hues in the fall when leaves lose their chlorophyll. Anthocyanins absorb blue-green light and reflect red light, whereas carotenoids largely absorb blue light and reflect yellow.

For bacteria, the situation is a little different. While some bacteria, like purple bacteria and green sulphur bacteria, also contain chlorophyll to absorb light for anoxygenic photosynthesis, cyanobacteria do not.

Where in the Plant does Photosynthesis take place?

In that, they have their own genome, or collection of genes, stored within circular DNA, chloroplasts are analogous to mitochondria, the energy centres of cells. These genes produce proteins that are necessary for the organelle and for photosynthesis. Thylakoids, which have a plate-like form, are found inside chloroplasts and are in charge of collecting light photons for photosynthesis. Thylakoids are arranged in columns called grana, which are piled on top of one another. The stroma, a liquid containing ions, molecules, and enzymes where sugar production takes occurs, is located between the grana.

A plant must first transform solar energy into chemical energy before it can be absorbed.

A pigment molecule like chlorophyll releases an electron when a photon of light strikes the reaction centre.

In order to make ATP (adenosine triphosphate, a source of chemical energy for cells) and NADPH, both of which are necessary for the following stage of photosynthesis in the Calvin cycle, the liberated electron must pass via an electron transport chain. By stealing one electron from water, the “electron” in the original chlorophyll pigment is filled. By breaking apart the water molecules, oxygen is released into the atmosphere.

The Calvin cycle fixes CO2 into sugars required for plant growth using energy accumulated from light-dependent processes. These reactions take occur in the stroma of the chloroplasts and are not directly fueled by light, therefore their moniker is “light-independent reactions.” The Calvin cycle is powered by ATP and NADPH, therefore they are still connected to light. The first reaction involves CO2 and ribulose-1,5-bisphosphate (RuBP), a five-carbon acceptor. Then, it separates into two molecules of 3-phosphoglyceric acid, a chemical with three carbons (3-PGA). An enzyme is known as RuBP carboxylase/oxygenase sometimes referred to as rubisco, is responsible for catalysing the process.

The C3, C4, and CAM pathways are the three basic categories of photosynthetic pathways. They all use the Calvin cycle to convert CO2 into sugars, but each pathway does so in a somewhat different way.

Green plants create food from unprocessed materials in sunlight through the endergonic, anabolic, and oxidation-reduction process of photosynthesis.

Question 2: Why chlorophyll is an essential photosynthetic pigment?

Chlorophyll-b and other pigments in the photosystem’s reaction centre absorb solar energy and transfer it to chlorophyll-a. Chlorophyll-a is ultimately what starts the photosynthetic process.

Question 3: How many molecules of ATP are required for the synthesis of one molecule of glucose in the C3 and C4 pathways?

Question 4: What are the enzymes that catalyze the dark reaction of carbon fixation located?

The stroma has enzymes that can produce carbohydrates using ATP and NADPH2 during the dark process. A series of enzyme-catalyzed processes located outside the thylakoids are responsible for carbon fixation in the stroma.

Question 5: What is the role of water in photosynthesis?

Question 6: Why do green plants start evolving carbon dioxide instead of oxygen on a hot sunny day?

On a hot, sunny day, the enzyme RuBP carboxylase becomes active, increasing and decreasing its affinity for carbon monoxide. Carbon fixed through photosynthetic processes is being lost more frequently due to photorespiration.