In plants, transportation is an important process. From roots to the tips of their leaves, plants carry the water and nutrients which are required to survive. The water and minerals are transported in plants by:

Xylem and phloem tissues are present all over the plants. These conducting tissues grow from the roots of trees and ascend through the trunks. Like spider webs, they eventually branch off into the branches and spread even more into every leaf.

A crucial part of plant nutrition is the sugars that the plant produces during photosynthesis. Similar to how the vascular system transports water, sugar is transported throughout the entire plant in the form of sucrose, despite glucose being the primary result of photosynthetic activity.

Nutrient-demanding dissolved sugars are transported from the leaves (where they are produced) or storage sites to other sections of the plant through the phloem, the vascular tissue that distributes organic nutrients throughout the body of the plant. Sugars in the phloem travel from high osmotic concentration and high water pressure regions, known as sources, to low osmotic concentration and low water pressure regions, known as sinks.

The sources of sugar for the remaining portion of the plant are referred to as nutrient-rich regions. the leaves, where sugar is made through photosynthesis. When nutrients are abundant, the places where they are stored, such as the roots and stems, may also serve as sources. Sugar is transferred to the phloem by active transport.

The phloem system’s ability to transport nutrients is unaffected by gravity. Contrarily, sucrose is translocated from the source (the leaf) to the site of metabolism or storage, which is referred to as a sink.

The leaves prepare glucose, which is then transformed into sugar.

Translocation is the transport of sucrose, amino acids, nutrients, etc., from the source to the sink within a plant.

Translocation in the phloem refers to the flow of different chemicals through the tissue of a plant, such as amino acids, sucrose, etc. Due to gravity, the translocation in the phloem is unaffected. Instead, sucrose is transported from the source (leaf) to the site of metabolism or storage, or “sink.” Depending on the plant’s requirements, These source and sink points can be reversed depending on the plant’s need.

Deciduous trees, for instance, exhibit the bidirectional movement of sap in the phloem by moving sugar from the roots to the developing buds in the early spring and from the photosynthesizing leaves to the roots in the summer. The xylem, in contrast, has a unidirectional movement that is always upward. As a result, depending on the situation, the food contained in phloem sap can be transferred in either direction.

The direction of movement in the phloem is variable, just like the relationship between the source and sink is. It may be bidirectional, moving either upwards or downwards. This is different from the upward movement seen in the xylem.

Phloem sap is the organic matter that travels via the phloem. It includes water, sucrose, other sugars, amino acids, and hormones (auxin, gibberellins, cytokinins, and abscisic acid). It moves from the places where carbohydrates are made or stored (a sugar source would be leaves that are photosynthesizing, for example) to the places where they are utilized (sugar sinks, like grains). For the components to be carried from the source to sink in the plants, the phloem sap must maintain both an osmotic potential (given by sucrose) and a particular water potential (supplied by water).

The path that sugars and other molecules take while moving through a plant begins in the organs these nutrients are used. Source regions, or sources, are the organs where the pathway starts, and sink regions, or sinks, The predominant organ for the formation of sugars is the leaf, by the process of photosynthesis, leaf is the primary organ for the production of sugars.

These sugars are transported to other parts of the plant or utilized locally by the leaf. Leaves are the main source regions, mature leaves can act as sources. Young leaves are unable to fully nourish themselves with their own sugar production.

Other sink tissues include growing reproductive tissues like seeds and fruit, which store resources for later use, and root systems, which cannot perform photosynthesis and must be fed by the leaves. Tubers (like potatoes and yams) and tap roots are additional storage organs that function as translocation sinks and are significant crops for human consumption (e.g., carrots and beets).

The translocation pathway is made up of plant structures like the stem of a herbaceous plant, the trunk, and branches of a tree, or the petiole of a leaf that are situated between terminal source and sink tissues. These tissues act as sinks because each of these structures contains a large number of living cells that need to be fed. However,  they serve dual roles, because in some plants (e.g., cereals such as rice and wheat) the stems act as temporary storage organs for nutrients.

These stems are transformed into source regions that supply nutrients for the developing seeds at later stages of the plant’s life cycle. Pea pods, for example, can undertake photosynthesis, as can a variety of non-leafy green tissues.

Mechanism of Translocation in the phloem

Though several theories have been advanced, none of them completely explain the mechanism of phloem conduction. Munch’s (1930) theory is the most compelling of the groups. The following are the main steps in the mass flow theory: 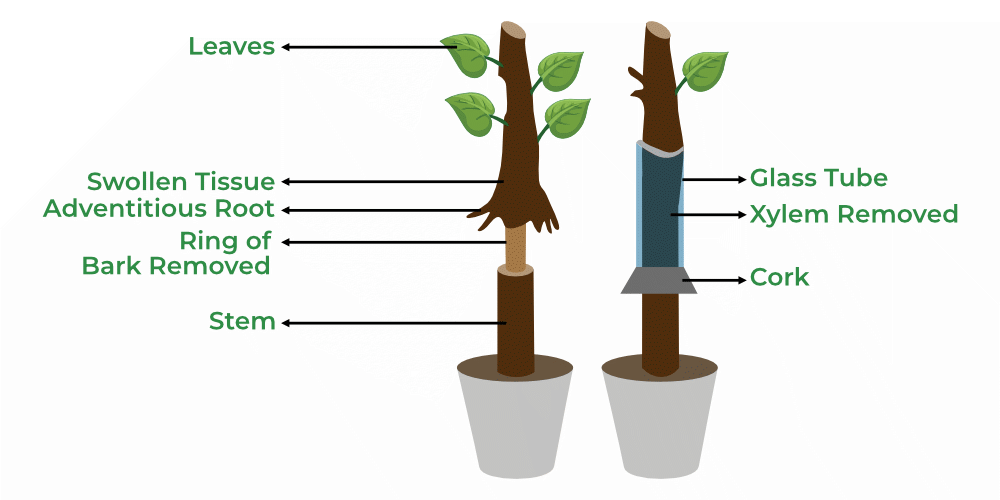 Malpighi carried out the Girdling experiment in 1672, Stephen Hales in 1727, and Hartig in 1837. In woody stems, it entails the removal of all tissue save the vascular cambium (bark, cortex, and phloem) aside from the xylem.

FAQs on  Phloem Transport: Flow From Source To Sink

Question 1: What does “source to sink transport” Mean?

One of the key factors influencing plant growth is the source-to-sink transport of sugar, which depends on the effective and controlled distribution of sucrose (and some other sugars including raffinose and polyols) throughout plant organs through the phloem.

Question 2: Why does phloem travel in both directions?

Phloem movement is bidirectional because sucrose accumulates in the phloem tissue, absorbs water, and raises the turgor pressure. The turgor pressure is low as a result of other areas losing water.

Question 3: Differentiate between diffusion and translocation in plants?

Due to the kinetic energy of the particles, diffusion is the movement of substances from their greater concentration to their lower concentration. Typically, it happens in all directions. Translocation is the term used to describe the large-scale movement of substances in solutions from inside plant channels in one direction to another due to forces other than the kinetic energy of the particles.

Question 4: Name the form of carbohydrates that are transported in plants as food.

In plants, food is transported in the form of sucrose.

Question 5: What are the main components of phloem sap?

Sugars, amino acids, vitamins, and organic and inorganic acids are the primary components of phloem sap.