Phases of a Compiler

Symbol Table – It is a data structure being used and maintained by the compiler, consisting of all the identifier’s names along with their types. It helps the compiler to function smoothly by finding the identifiers quickly.

The analysis of a source program is divided into mainly three phases. They are:

The compiler has two modules namely the front end and the back end. Front-end constitutes the Lexical analyzer, semantic analyzer, syntax analyzer, and intermediate code generator. And the rest are assembled to form the back end.

Syntax error can be detected at this level if the input is not in accordance with the grammar. 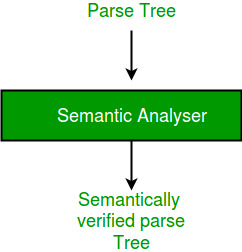 All these six phases are associated with the symbol table manager and error handler as shown in the above block diagram.