A partial class is a special feature of C#. It provides a special ability to implement the functionality of a single class into multiple files and all these files are combined into a single class file when the application is compiled. A partial class is created by using a partial keyword. This keyword is also useful to split the functionality of methods, interfaces, or structure into multiple files.

Example: Here, we are taking a class named Geeks and split the definition of Geeks class into two different files named Geeks1.cs, and Geeks2.cs as shown below: 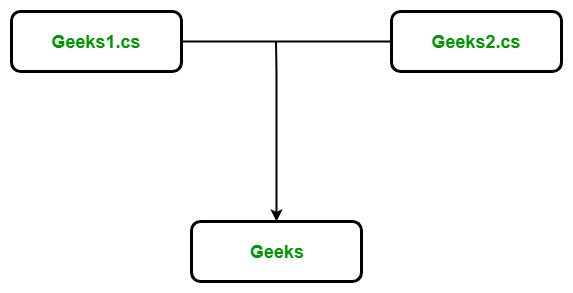 In Geeks1.cs, and Geeks2.cs, a partial class is created using the partial keyword and each file contains different functionality of Geeks class as shown below.


When we execute the above code, the compiler combines Geeks1.cs and Geeks2.cs into a single file, i.e. Geeks as shown below.
Geeks This class may contain the Main Method. For simplicity, here Main() method is not included.