Java provides many types of operators which can be used according to the need. They are classified based on the functionality they provide. Some of the types are:

Let’s take a look at them in detail.

2. Unary Operators: Unary operators need only one operand. They are used to increment, decrement or negate a value.

The general format of the assignment operator is:

In many cases, the assignment operator can be combined with other operators to build a shorter version of the statement called a Compound Statement. For example, instead of a = a+5, we can write a += 5.

4. Relational Operators: These operators are used to check for relations like equality, greater than, and less than. They return boolean results after the comparison and are extensively used in looping statements as well as conditional if-else statements. The general format is,

5. Logical Operators: These operators are used to perform “logical AND” and “logical OR” operations, i.e., a function similar to AND gate and OR gate in digital electronics. One thing to keep in mind is the second condition is not evaluated if the first one is false, i.e., it has a short-circuiting effect. Used extensively to test for several conditions for making a decision. Java also has “Logical NOT”, which returns true when the condition is false and vice-versa

The general format is:

7. Bitwise Operators: These operators are used to perform the manipulation of individual bits of a number. They can be used with any of the integer types. They are used when performing update and query operations of the Binary indexed trees.

8. Shift Operators: These operators are used to shift the bits of a number left or right, thereby multiplying or dividing the number by two, respectively. They can be used when we have to multiply or divide a number by two. General format-

9. instanceof operator: The instance of the operator is used for type checking. It can be used to test if an object is an instance of a class, a subclass, or an interface. General format-

Precedence and Associativity of Operators

Precedence and associative rules are used when dealing with hybrid equations involving more than one type of operator. In such cases, these rules determine which part of the equation to consider first, as there can be many different valuations for the same equation. The below table depicts the precedence of operators in decreasing order as magnitude, with the top representing the highest precedence and the bottom showing the lowest precedence. 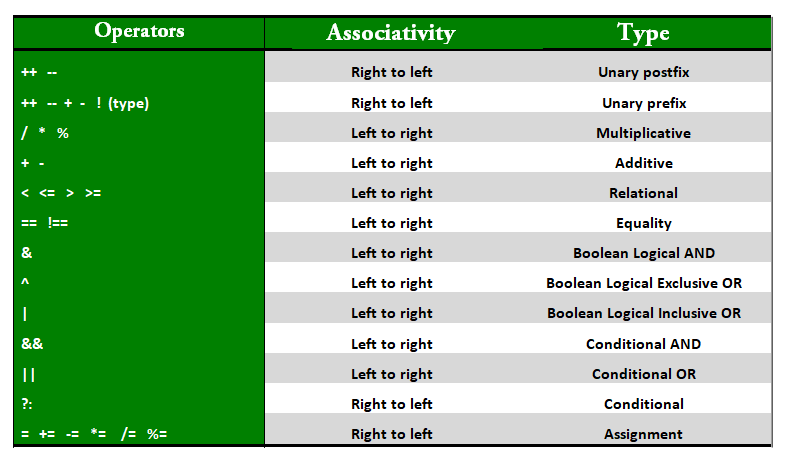 1. Precedence and Associativity: There is often confusion when it comes to hybrid equations which are equations having multiple operators. The problem is which part to solve first. There is a golden rule to follow in these situations. If the operators have different precedence, solve the higher precedence first. If they have the same precedence, solve according to associativity, that is, either from right to left or from left to right. The explanation of the below program is well written in comments within the program itself.

2. Be a Compiler: Compiler in our systems uses a lex tool to match the greatest match when generating tokens. This creates a bit of a problem if overlooked. For example, consider the statement a=b+++c; too many of the readers might seem to create a compiler error. But this statement is absolutely correct as the token created by lex are a, =, b, ++, +, c. Therefore, this statement has a similar effect of first assigning b+c to a and then incrementing b. Similarly, a=b+++++c; would generate an error as tokens generated are a, =, b, ++, ++, +, c. which is actually an error as there is no operand after the second unary operand.

3. Using + over (): When using + operator inside system.out.println() make sure to do addition using parenthesis. If we write something before doing addition, then string addition takes place, that is, associativity of addition is left to right, and hence integers are added to a string first producing a string, and string objects concatenate when using +. Therefore it can create unwanted results.

This article is contributed by Rishabh Mahrsee. If you like GeeksforGeeks and would like to contribute, you can also write an article using write.geeksforgeeks.org or mail your article to review-team@geeksforgeeks.org. See your article appearing on the GeeksforGeeks main page and help other Geeks. Please write comments if you find anything incorrect or if you want to share more information about the topic discussed above.