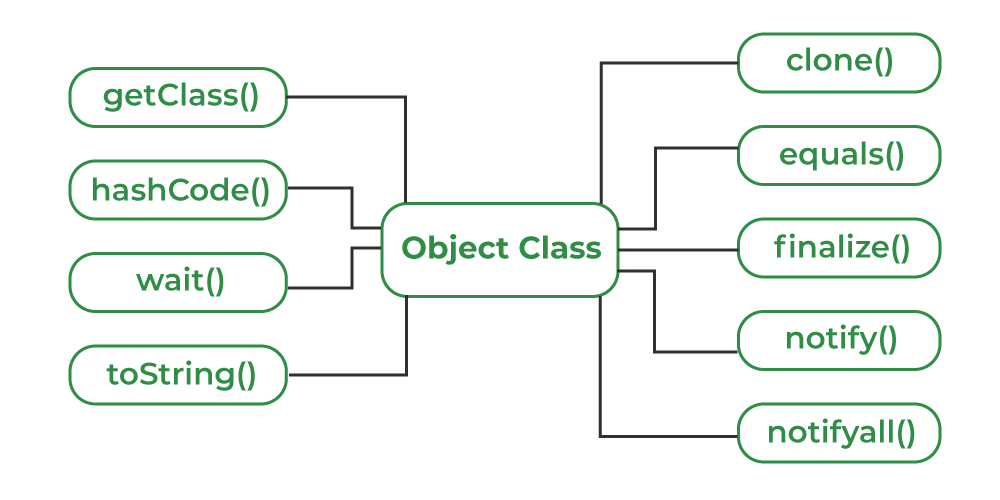 The Object class provides multiple methods which are as follows:

The toString() provides a String representation of an object and is used to convert an object to a String. The default toString() method for class Object returns a string consisting of the name of the class of which the object is an instance, the at-sign character `@’, and the unsigned hexadecimal representation of the hash code of the object. In other words, it is defined as:

Note: Whenever we try to print any Object reference, then internally toString() method is called.

Use of hashCode() method

It returns a hash value that is used to search objects in a collection. JVM(Java Virtual Machine) uses the hashcode method while saving objects into hashing-related data structures like HashSet, HashMap, Hashtable, etc. The main advantage of saving objects based on hash code is that searching becomes easy.

Note: Override of hashCode() method needs to be done such that for every object we generate a unique number. For example, for a Student class, we can return the roll no. of a student from the hashCode() method as it is unique.

Note: It is generally necessary to override the hashCode() method whenever this method is overridden, so as to maintain the general contract for the hashCode method, which states that equal objects must have equal hash codes.

It returns the class object of “this” object and is used to get the actual runtime class of the object. It can also be used to get metadata of this class. The returned Class object is the object that is locked by static synchronized methods of the represented class. As it is final so we don’t override it.

Note: After loading a .class file, JVM will create an object of the type java.lang.Class in the Heap area. We can use this class object to get Class level information. It is widely used in Reflection

This method is called just before an object is garbage collected. It is called the Garbage Collector on an object when the garbage collector determines that there are no more references to the object. We should override finalize() method to dispose of system resources, perform clean-up activities and minimize memory leaks. For example, before destroying the Servlet objects web container, always called finalize method to perform clean-up activities of the session.

Note: The finalize method is called just once on an object even though that object is eligible for garbage collection multiple times.

It returns a new object that is exactly the same as this object. For clone() method refer Clone().

The remaining three methods wait(), notify() notifyAll() are related to Concurrency. Refer to Inter-thread Communication in Java for details.