Explanation –
Here, we need to maintain the order of a’s and b’s.That is, all the a’s are coming first and then all the b’s are coming. Thus, we need a stack along with the state diagram. The count of a’s and b’s is maintained by the stack. Here, we have 3 ‘b’s for every 2 ‘a’s. We will take 2 stack alphabets:

Approach used in the construction of PDA –
As we want to design a NPDA, thus every time ‘a’ comes before ‘b’. We will push three ‘a’s into the stack for two consecutive two ‘a’s and again for the next two ‘a’s, we will push three ‘a’ into the stack. That is, for the first ‘a’ we will do nothing only state will change and for the next ‘a’ we will do the pushing operation and similarly we perform this alternatively, i.e.,
For two a’s we push three ‘a’
For four b’s we push six ‘a’
After that, when ‘b’ comes then pop one ‘a’ from the stack each time.

So, at the end if the stack becomes empty then we can say that the string is accepted by the PDA. 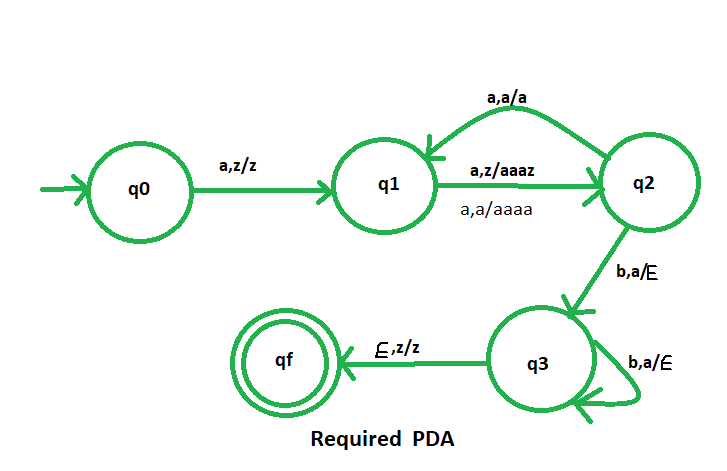