The move() function moves a file or a directory from source to the destination specified by the user. If you want to move a file to a folder in which a file with the same name already exists, the function will overwrite the file if we have set the option of overwrite to true else it will throw an error that a file already exists in the folder.

Parameters: This function accepts four parameters as mentioned above and described below.

Return value: It does not return anything. 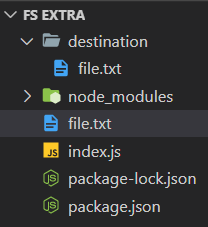 Output: You will observe that the file in the destination folder is now overwritten by the file outside the folder.

Note: If you have not set the overwrite property to false the above program will result in the following error:

So this is how we can use move() function in our program.