While microorganisms have lots of benefits they can be unsafe and cause dangerous illnesses as well. For instance, we see growth developing on bread when left unused for several days. This is on the grounds that bread is moist. one of the most favorable conditions for the breeding of microorganisms

Microorganisms are categories in four groups.

Viruses, on the other hand, are microscopic but differ from microbes. They reproduce only in host cell. The host organisms can be animals, bacteria, or even plants for that matter. A virus is typically coated by protein and has a nucleic acid molecule. 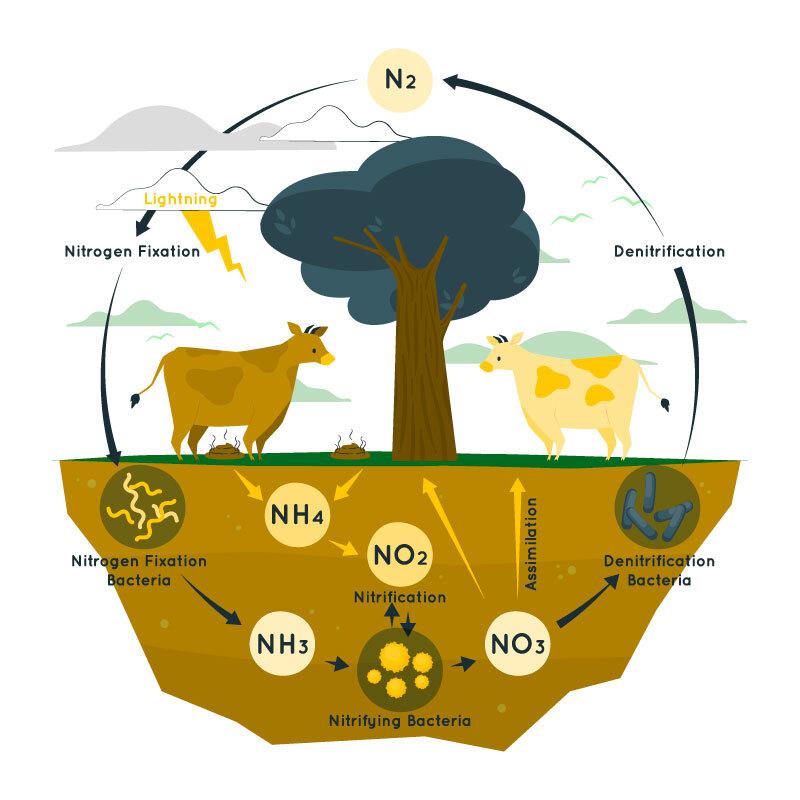 Nitrogen fixation is the important biological process and the initial stage of the nitrogen cycle.  nitrogen in the atmosphere is change into ammonia  by some bacterial species like Rhizobium, Azotobacter, etc. Plants are the main source of food. The nutrients get from plants are synthesis by plants using various elements from atmosphere as well as from the soil. Plants can use oxygen and carbon dioxide from air, but can not directly use nitrogen from air, some bacteria helps in nitrogen fixation.

A types of microorganisms called Rhizobium, help in nitrogen fixation. These microscopic organisms live in the roots of leguminous plants (e.g., pea and beans plants) and use specific kinds of enzymes, they help in fixing nitrogen in the soil.

This type of nitrogen gets dissolves  in the soil,and plants absorb the changed nitrogen from the soil. This is the purpose for farmers carrying out crop rotation, where leguminous plants help to refill nitrogen content in the soil without the need of fertilizer.

Long employed as fertilisers in agriculture, nitrogenous materials gained increased recognition throughout the 19th century for the significance of fixed nitrogen to developing plants. As a result, deposits of sodium nitrate (saltpetre) from Chile as well as ammonia generated during the process of creating coke from coal were both recovered and used as fertilisers.

The Haber-Bosch method is the most cost-effective nitrogen-fixation method known since it produces ammonia directly from nitrogen and hydrogen. Fritz Haber, a German chemist, discovered in about 1909 that nitrogen from the air could be combined with hydrogen at extremely high pressures and moderately high temperatures in the presence of an active catalyst to produce a very high proportion of ammonia, which serves as the precursor to a variety of nitrogen compounds.

Carl Bosch developed this method, which later became known as the Haber-Bosch method or the synthetic ammonia method. Due to Germany’s effective use of this method during World War I, the sector saw quick growth and many other nations built similar operations following the war. The Haber-Bosch method is currently one of the most prevalent and fundamental procedures used by the chemical industry worldwide.

Question 1: What are microorganisms?

An organisms can only see with the microscope is known as microorganisms. Ex, bacteria, fungi, algae, protozoa, viruses.

Question 2: What is nitrogen fixation?

Nitrogen Fixation is a biological process in which the nitrogen gas is converted into a usable form for plants and other microorganisms.

Question 3: What is symbiotic Nitrogen fixation?

A types of microorganisms called Rhizobium, help in nitrogen fixation plants. This bacteria lives in the roots of plants.

Question 4: Which bacteria helps in nitrogen fixation and where it lives?

Rhizobium bacteria help in nitrogen fixation in plants. It lives in roots of plants.

Henry Cavendish initially developed a method for nitrogen fixation in 1784, utilising electric arcs to react nitrogen and oxygen in the air. In 1903, the Birkeland-Eyde procedure used this approach. A very similar natural occurrence is lightning’s fixation of nitrogen.