Nitrogen is an atomic element with the atomic number 7 and the symbol N. Nitrogen is plentiful in amino acids, nucleic acids, and the energy transfer molecule adenosine triphosphate. After oxygen, carbon, and hydrogen, nitrogen makes up around 3% of the total mass. The nitrogen cycle depicts the movement of nitrogen from the atmosphere to the biosphere and organic molecules and back.

Stone fruit trees require an adequate annual supply of nitrogen for healthy growth and productivity, like amino acids, proteins, nucleic acids, and other vital nutrients. Ammonium or nitrate are the most common forms of nitrogen taken by fine roots. Uptake can be influenced by soil type, pH, temperature, soil moisture level, and time of year. 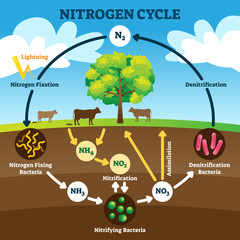 Nitrogen, which is found in proteins and nucleic acids, is necessary for life on Earth to exist. Nitrogen is made available to plants through a sequence of microbial changes, which in turn support all animal life.

The nitrogen cycle is a biogeochemical process in which inert nitrogen in the atmosphere is converted into a form that may be used by living organisms.

Organic nitrogen is found in live creatures and is transferred down the food chain through other living organisms’ intake. There is a massive amount of inorganic nitrogen in the atmosphere. This nitrogen is made available to plants by symbiotic bacteria that convert inert nitrogen into helpful forms such as nitrites and nitrates. Nitrogen undergoes numerous changes to maintain ecosystem balance. The marine nitrogen cycle is one of the most complex biogeochemical cycles, affecting a wide variety of biomes.

Nitrogen fixation is a chemical process that turns molecular nitrogen in the atmosphere, which has a strong triple covalent bond, into ammonia or related nitrogenous compounds, primarily in the soil or aquatic environments but also in industry.

The presence of microorganisms in the soil converts ammonia to nitrate in this process. When Nitrosomonas bacteria species oxidize ammonia, they produce nitrates. Nitrobacter then transforms the generated nitrites into nitrates. This response is crucial because ammonia gas is toxic to plants.

Plants use their roots to absorb nitrogen molecules from the soil, which are available in the forms of ammonia, nitrite ions, nitrate ions, or ammonium ions and are used to make plant and animal proteins. Plants enter the food web in this way when they are eaten by primary consumers.

When plants or animals die, the nitrogen in organic matter is released back into the soil. Decomposers, present in the soil, turn organic waste back into ammonium. During the decomposition process, ammonia is created, which is then used in other biological activities.

Nitrogen in the ecosystem should be available in a form that living organisms can use. In this condition, ammonification is critical because it gives nitrogen to the soil in a way that plants can use and pass it along the food chain. Ammonification is the greatest technique for obtaining nitrogen for many types of plants that live in acidic soils. When fertilizers are used to increase ammonia levels in the soil, algae can overgrow, causing soil toxicity and ecosystem imbalance.

This biogeochemical process is one of the primary responses to changes in oxygen content in the environment. Denitrification is a natural process that occurs at extreme concentrations in both terrestrial and aquatic ecosystems in regulated environments such as marine and freshwater settings, tropical and temperate soils, wastewater treatment plants, aquifers, manure storage, and so on.

Question 1: Where is nitrogen found?

It is the fifth most abundant element in the universe, making up about 78 percent of the earth’s atmosphere and holding an estimated 4,000 trillion tonnes of gas. A method of removing nitrogen from liquefied air is fractional distillation.

Question 2: What are nitrogen tanks used for?

To avoid oxidation and to produce a safe, inert environment that sweeps away furnace-generated gases, nitrogen is used.

Question 3: How is nitrogen fixed?

A varied array of microorganisms known as diazotrophs, which include bacteria like Azotobacter and archaea, fix nitrogen in the soil organically. Plants develop symbiotic connections with nitrogen-fixing bacteria, particularly legumes.

Question 4: How does nitrogen occur in the environment?

The majority of nitrogen molecules are present in the atmosphere. Nitrogen can be found in both water and soil as nitrates and nitrites.

The process of turning nitrate into gaseous nitrogen, allows nitrogen compounds to return to the atmosphere. This is the penultimate stage of the nitrogen cycle, and it happens in the absence of oxygen.