Nickel is a chemical element with the symbol Ni and the atomic number is 28. It is silvery-white and harder than iron. It takes on a high polish. It is the fifth most abundant element on the earth. It is used in everyday life are many and varied. From coins, rocket engines, wires, and gas turbines to rocket engines. It was first isolated and classified as a chemical element in the year 1751 by Axel Fredrik Cronstedt. Chlorine is the chemical element with the symbol Cl and its atomic number is 17. It is the second lightest of the halogens. It is produced in large quantities for use as disinfectants and bleach for both domestic and industrial purposes. It is a toxic corrosive greenish-yellow gas that is irritating to the eyes and to the respiratory system.

Nickel Chloride is the chemical compound with the symbol NiCl2. It appears as a brown or green-colored solid. It is denser than water and is a mild Lewis acid. It is also used as a calcium channel blocker and a hapten. It is the most important source of nickel for chemical synthesis. It is also known as nickelous chloride, nickel (II) salt of hydrochloric acid. it is a carcinogen that is known to cause life-threatening diseases like lung and nasal cancers.

To write the formula of Nickel Chloride  we look at the periodic table and find Nickel for the Ni symbol. And then chloride we look at for chlorine that is Cl. Nickel is a chemical element with symbol Ni its atomic number is 28 and electron configuration is [Ar]3d10 4s2. Chlorine is the chemical element with the symbol Cl  its atomic number is 17 and its electron configuration is [Ne]3s2 3p5. Nickel is a metal Chlorine is a non metal So the ionic compound we need to make sure the charges of Nickel have a 2+ charge and chlorine has a 1- charge .So the chemical formula of Nickel Chloride is NiCl2

Nickel Chloride is the chemical compound with the symbol NiCl2 .in this structure Nickel is the central atom attached to two chlorine atoms. The Lewis structure is shown as below diagram 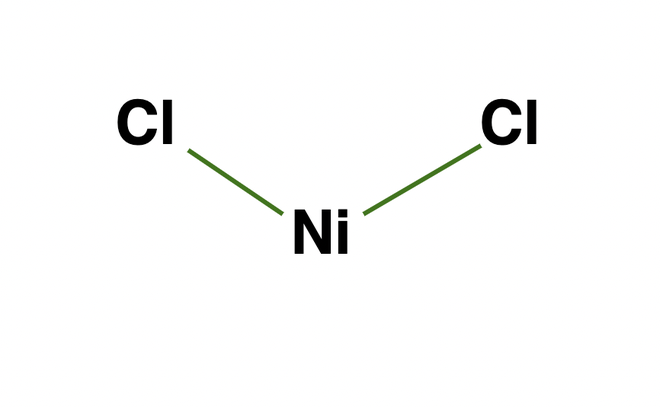 Question 1: Is Nickel reacts to air?

Nickel does not react with air under ambient conditions. nickel is a metal of silvery-white color that does not grow dull. In air it becomes covered with an oxide film.At the higher temperatures the reaction between nickel metal and oxygen appears not to proceed to completion but gives some nickel oxide.

Question 2: What is Nickel Chloride?

Nickel Chloride is the chemical compound with the symbol NiCl2. It appears as a brown or green-colored solid. It is denser than water and is a mild Lewis acid

Question 3: What is the function of Nickel Chloride?

Nickel Chloride is used for nickel plating cast zinc, as an agent in electrolytic refining of nickel as a chemical intermediate for nickel catalyst and complex nickel salts as an absorber of ammonia gas in industrial gas masks.

Nickel and High Nickel alloys are one of the proven metallic materials that offer great corrosion resistance in chlorine, hydrogen chloride, and hydraulic acid.

Question 6: What are the problems with nickel?

It makes environmental pollution and it’s contact can cause a verity of side effects on human health they are allergy, cardiovascular and kidney diseases lung fibrosis lung and nasal cancer.

Question 7:  What are the uses of chlorine?

Chlorine is a chemical element with the symbol Cl. It has a variety of uses. It is used in drinking water and swimming pool water to kill bacteria.It is used as a bleaching agent and also used in cleaning products. Chlorine is used in the production of paper and cloth.

More metals conduct electricity. Nickel is a fairly good conductor of electricity and heat and is one of only four elements that are ferromagnetic at room temperature.