Excretion is the main process to balance the pure & impure particle percentage in an animal body. Humans incur many things by the means of food, water, etc. Among them, many substances are such that may harm the body. All those substances will remove from the body. This method is called Excretion. If Excretion is not performed by any animal for a long time, then the death of the animal will be a matter of time. For humans, Excretion can take place with the help of skin, lungs, liver, etc. But the main component which helps to Excrete more is the Kidney. Sweat is the excretion material that comes out from the skin. Lungs help to excrete Carbon Dioxide. The Kidney helps to produce Urine as the excreted material. Nephron helps to excrete materials from the Kidney.

The Nephron is the functional unit of the Kidney. The Nephron is the small functional structure that produces Urine in humans. The Urines which are being produced by the Nephrons are being excreted outside of the body. ‘Nephron’ word comes from the Greek word ‘Nephros’. This means ‘Kidney’ in Greek. In every Kidney, there are 1 million Nephrons present. There are two Kidneys in humans. So, there are nearly 2.5 million Nephrons present in the human body. 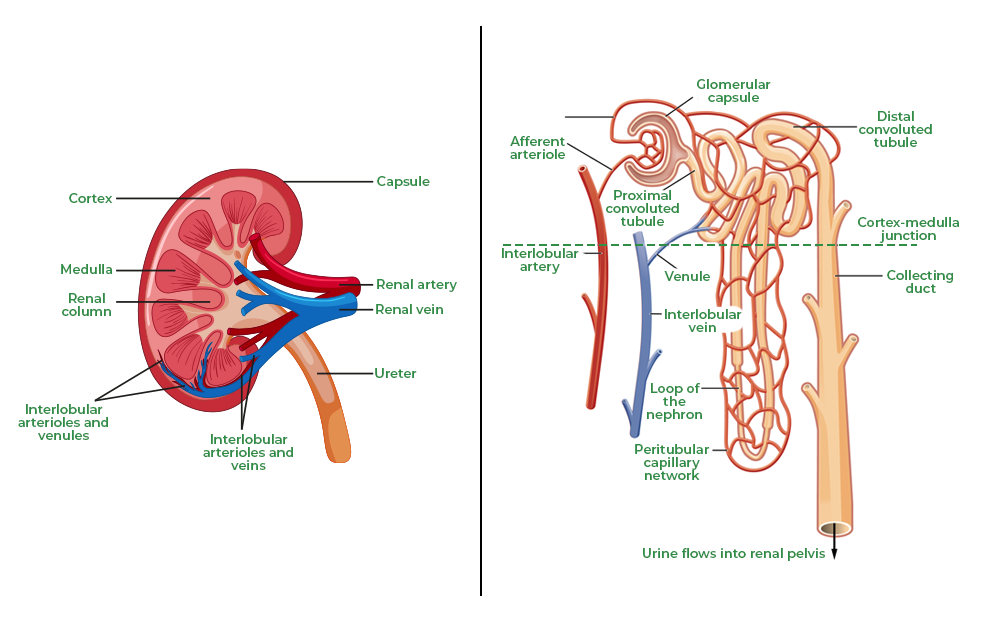 There is no need to define the importance of Nephron. As it is the functional unit of the Kidney, hence it is highly important to our life. Excretion takes part with the help of Nephrons. Though there are also many other ways to excrete impure substances. But the excretion process of Nephron can’t be balanced with any other method. Skin, Lungs, and Liver can excrete impure things. But Kidney can excrete nearly all types of impurities of the body. That is why unfunctional Kidney may arise many diseases. If we can’t throw out the impurities outside of the body, it will cause severe damage to the body. Not excretion of the impurities of the body, since a long time can lead to the death of certain human individuals.

Mechanism of the Excretion

The function of the Henle’s Loop is different in its different limbs. Through the ascending limb of the Henle’s Loop, water can’t be moved out. From this limb, only some particular substances like 25% Sodium, 25% Calcium, 20% Potassium, and 55% Magnesium can be removed. Means here also, a little percentage of Re-Absorption takes place. Whereas in the descending limb, water can only be removed. In this part of Nephron, the concentration of Urine is performed.

In this part of Nephron, the final step of excretion is performed. Here also, some little amount of Re-Absorption can visualize. Like some little amount of Sodium, Calcium is being Re-Absorbed here. Besides it, the Secretion step is performed here. Some important impure substances or harmful ions are Secreted from the DCT. Thus, these substances will mix up with the Urine. The ions are Hydrogen, Potassium & Ammonium ions. Also, sometimes Uria & Uric Acid mixed up with the excretion in a small amount.

Types of Transporters in Nephron

The Transporter is the substance by which different elements get exchanged through the membrane. Here, in the case of Nephrons, the processes of Filtration, Re-Absorption & Secretion are also completed with the help of these transporters present in the membrane of the Renal Tubules.

Function Of The Nephrons

Question 1: What is the length of each nephron?

Every nephron is 35 to 40 cm long in a folded way. The coiled tube can’t measure how much can be the length of the tube in unfolded manner. So, scientists measure the total length of Nephrons as nearly 40 cm.

Question 2: Why the Medulla of the Kidney is more salted?

Question 3: What is Bowman’s Space?

Question 4: What is the Renal Pelvis?

The Renal Pelvis is the common space in the Kidney. There are all the Collecting Ducts combined. This is the last space where the excreted item is stored before leaving the Kidney.

Question 5: Write down the parts of the Nephrons with their region inside of the Kidney

The parts of the Nephrons along with the region of the Kidney is: