Nature is a blessing to us. The biosphere is the area of the earth that contains both living and nonliving organisms. It is home to a wide range of species that all rely on one another. Biological diversity refers to the interdependence of species and their interaction with the environment to support life. 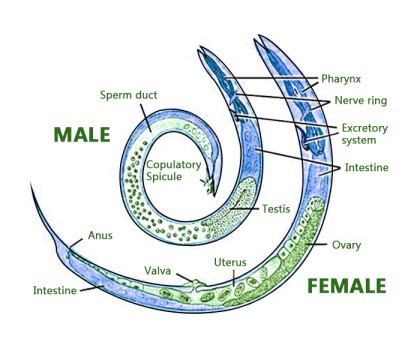 Nematoda is one of the most numerous phyla. Currently, approximately 15,000 nematode species are known. It is difficult to classify due to the wide range of forms and structures. Chitwood (1933) classified them as Phasmidia or Aphasmidia based on the presence or absence of phasmids.

The Phasmidia class is divided into the following orders:

Question 1: What is the Class Rhabditea?

Both parasitic and free-living nematodes belong to the class Rhabditea. In this class, parasitic nematodes make up the majority. Rhabditea Free-living obtains its energy from bacteria. Both in water and between soil granules, they are present.

Question 2: What function do nematodes provide in the soil?

By driving live and dormant microbes on their surfaces and in their digestive systems, nematodes aid in the distribution of bacteria and fungi through the soil and along with roots. Higher-level predators, such as predatory nematodes, soil microarthropods, and soil insects, consume nematodes. Soil nematodes can also help farmers maintain adequate soil nitrogen levels. They mineralize critical soil processes into inorganic forms that plants can use.

Question 3: What is the anatomy of a nematode?

Nematodes range in thickness from 5 to 100 m and length from 0.1 to 2.5 mm. They can range in size from microscopic to 5 cm in length, with some reaching more than 1m in length. The body is characterized by ridges, rings, bristles, or other distinguishing features.

Question 4: Is Nematoda useful in agriculture?

A nematode can be beneficial or harmful to plant health depending on its species. There are two types of nematodes: predatory nematodes that kill garden pests and pest nematodes that attack plants (root-knot nematodes).

Plant viruses are spread between crop plants by vectors. Plant-parasitic nematodes, such as eelworms, frequently attack leaves and buds. Plant rotation of nematode-resistant species can be used to manage parasitic nematodes. As a treatment method, natural antagonists such as the fungus Gliocladium roseum are used.

Question 5: What are the benefits of Nematoda?