In computer architecture, multithreading is that the ability of a central processing unit (CPU) (or one core during a multi-core processor) to supply multiple threads of execution concurrently, supported by the operating system. Latency encryption enhances machine usage by enabling it to perform useful functions.
Multithreading is that the ability of a program or a software process to manage its use by quite one user at a time and to even manage multiple requests by the identical user without having to possess multiple copies of the programming running within the computer. Multithreading is one way to implement latency hiding.

Multithreading is a useful mechanism for reducing latency. A multithreaded computation typically begins with a sequential thread, then some supervisory overhead to set up (schedule) various independent threads, then computation and communication (remote accesses) for individual threads, and finally a synchronization step to terminate the threads before starting the next unit. 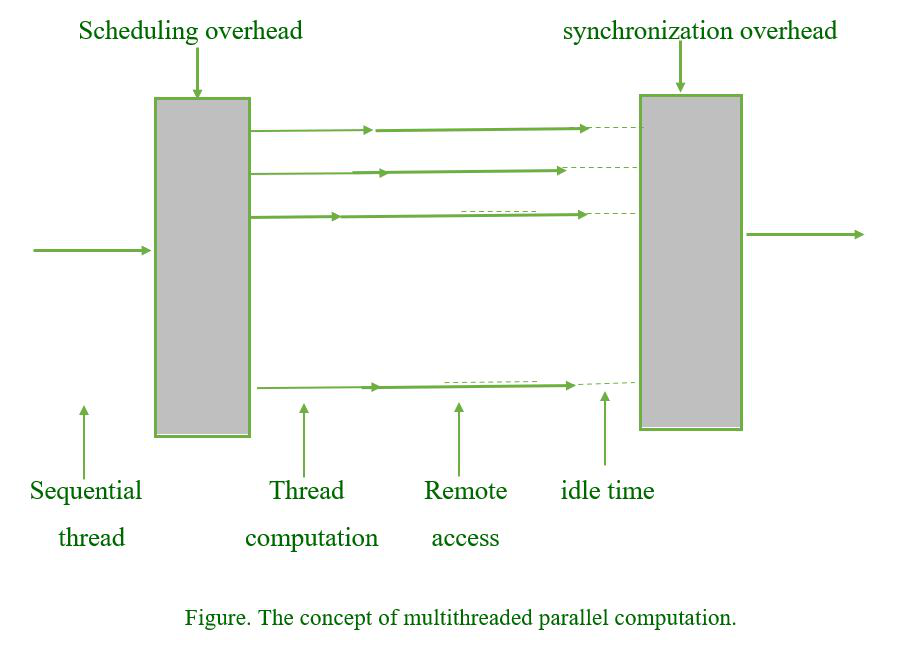 Idle time:
The ideal time is the time it would take to complete a given task if there were no interruptions or unplanned problems. When planning and estimating, many time-based estimation methods make use of this timescale.

Synchronization overhead:
Synchronization overhead is defined as the amount of time one task spends waiting for another. Tasks may synchronize at an explicit barrier where they all finish a timestep. Time spent waiting for other tasks wastes the core on which that task is working. This period of waiting is referred to as synchronization overhead.
It should be noted that the use of multithreading is not limited to parallel processing environments, but also provides benefits on a single processor. For improved performance, a uniprocessor with multiple independent threads to execute can switch between them on each cache miss, every load, after each instruction, or after each fixed-size block of instructions. The processor may need multiple register sets (to reduce the context switching overhead) and a larger cache memory (to hold recently referenced data for several threads), but the benefits can outweigh the costs. Hirata et al. [Hira92] claims speedups of 2.0, 3.7, and 5.8 in a processor with nine functional units and two, four, or eight independent threads, respectively.

Refer for Multi threading models, benefits of Multithreading, and difference between multitasking, multithreading and multiprocessing.