Working:-
The main condition for MACA to work, is that the stations are in sync with frame sizes and data speed. It includes transmission of two frame called RTS and CTS preceding information transmission. RTS means Request to Send and CTS means Clear to Send. Stations near to the transmitting station can hear RTS and remains silent to hear the CTS.
Assume a transmission station A has data frame to send to a receiving station B.

The whole process will work as follows: 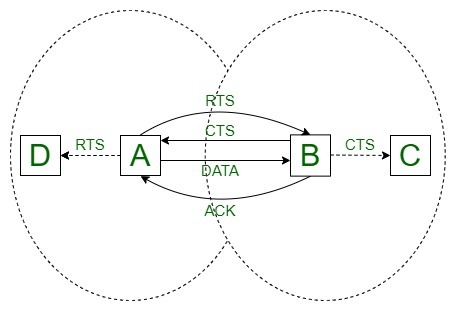 Solution to Hidden/Exposed Terminal Problem:
MACA protocol uses RTS and CTS to avoid hidden and exposed terminal problem. In hidden terminal problem two nodes try to contact same node at a same time which can create collision to combat this if two nodes send RTS to same node then the node which receives CTS will send the data not the other one which will avoid the collision.

In exposed terminal problem one node stop receiving because it assumes that it can cause interference and so stops its transmission attempts which will make the further nodes out of range. In this case RTS and CTS solves the problem and no terminal can stop transmission because of interference.