Plantae is the plant kingdom that contains all plants on Earth. They are eukaryotes with many cells. The presence of the cell wall, an impermeable wall that surrounds the cell membrane, distinguishes them. Chlorophyll, a green pigment found in plants, is essential for photosynthesis. As a result, they consume in an autotrophic manner. Because of its immensity, the plant kingdom is divided into various subdivisions. Understanding the categorization of the Kingdom Plantae is the first step in understanding plants. Understanding the fundamentals makes it easier to learn everything there is to know about each plant.

According to Whittaker’s Five Kingdom Grouping, all living things are classified into five kingdoms: Protista, Monera, Fungi, Plantae, and Animalia. If you want to learn more about plants, you must first grasp the Kingdom Plantae, sometimes known as the Kingdom of Plants. The variety of plants seen here will astound you. Both the smallest plants, such as algae and the largest plants, such as the Sequoia, may be seen. Flowers are an extremely appealing organelle found in certain plants but not others. It is only a thalloid structure in basic plants, but some plants have an appropriate root system, shoot system, and leaf structure.

Mosses are non-vascular, flowerless plants that belong to the Bryophyta taxonomic group. The parent group bryophytes, which includes hornworts, liverworts, and mosses, is also known as Bryophyta. Mosses usually form dense, green mats or clusters in moist or shady locations. Individual plant leaves are generally only one cell thick, attached to a stem that may or may not have branches, and serve a very limited function in water and nutrient transfer. Despite the fact that certain species contain conducting tissues, these tissues are often undeveloped and visually separate from vascular plant tissue. Mosses do not produce seeds, but rather sporophytes, which are unbranched stalks capped with spore-containing capsules.

Mosses are often confused with lichens, liverworts, and hornworts. Mosses are classified as “non-vascular” plants, along with hornworts and liverworts. Despite the fact that many mosses have sophisticated vascular systems, haploid gametophyte production is the most important stage in the life cycles of all of these plants. In contrast, in the pattern of all vascular plants, the diploid sporophyte generation predominates (seed plants and pteridophytes). Despite their superficial resemblance to mosses, lichens are unrelated to them, despite common names such as “reindeer moss” or “Iceland moss.” 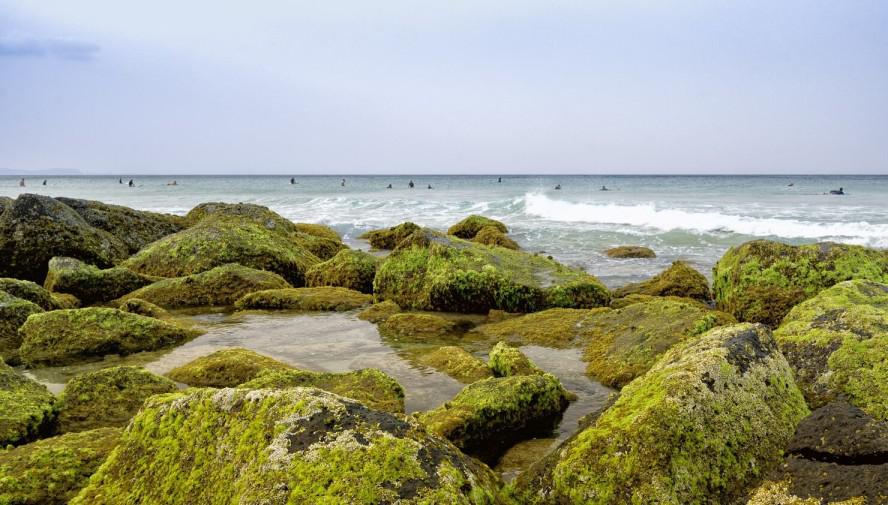 The oldest terrestrial plants are mosses. Historically, the phylum Bryophyta was used to classify all mosses. The True mosses, sometimes known as the Musci, were one of the three groups that made up the Bryophyta. A novel taxonomy that places the Bryophyta as a subgroup of the Mosses has recently been proposed due to the differentiation of the thallus and, in particular, the sporangia. This most recent understanding distinguishes the following groups:

The liverworts, with their flat thallus that lies on the ground and bears rhizomes that connect to the soil, are the most basic mosses. There are almost usually oil cells in the thallus. There are gametangiophores in the form of umbrellas that are either male (referred to as antheridiophores; phore means to carry) or female (called archegoniophores). The one-egg cell-bearing female archegonia opens towards the bottom surface, whereas the male antheridia open toward the upper portion. The archegoniophore’s margins are downwardly curled in a small curvature (like the cap of mushrooms). The adult sporangium protrudes slightly from the base of the sporophyte as the seta, the stalk at its base, grows. The grooves on the spore caps allow the spores to be discharged within a few hours of the caps being opened. Example: Marchantia

Liverworts and hornworts are similar, but hornworts appear to be more like actual plantlets. There are just one or two big chloroplasts in each cell, and they never have oil cells. In the upper portion of the thallus, the gametangia are recessed. The term “Hornworts” refers to the adult sporangia (sporophyte, 2n) that protrude above the surface as little horns. Strong outgrowths from the seta, the sporophyte’s base, create these horns. After the grooves in the sporangium open, the spores can continue to disperse for a few weeks. There are a little over 100 different species. Although they are not yet fully established, they are fairly uncommon in the Netherlands.

Despite not having actual stems, leaves, roots, or tissues, the architecture of real mosses has a unique stem and leaf-like look. At the very top of the male and female gametophytes, the gametangia form. The zygote turns into a sporophyte after fertilization, but it stays connected to the female gametophyte. The sporophyte consists of a seta and a capsule with an operculum as a cap. The teeth at the edge of the capsule opening (peristome) become evident as the capsule ripens and the operculum separates. The sporangium extends above the other plantlet sections due to the seta’s extension, leaving it open to the wind. Spore-producing cells go through meiosis inside the capsule to create haploid spores. These spores can take days to disperse. The Bryophytes’ largest and most prevalent phylum is by far the true mosses. The Netherlands is home to more than 500 species. Sphagnum, Polytrichum, and funaria, as examples.

Sphagnopsida, sometimes known as peat moss or sphagnum moss, is the first moss group we’ll examine. Numerous mosses that live in moist, bog-like regions and frequently form sizable, spongy clumps are part of this category. These mosses are frequently utilized as mulch to improve the soil but can also make the soil acidic. Plants that thrive in acids, such as blueberries and cranberries, are often found growing alongside peat moss. One of the various types of plants that can decompose into peat is peat moss. One of the many uses for peat is as a fuel substitute for cooking and heating homes. In truth, peat has been gathered and utilized for this purpose for millennia in some regions of Europe.

The following class, Andreaeopsida, is also known as lantern mosses or rock mosses and grows on rocks. Numerous species grow in tufts and are black in color. The labels “rock” and “lantern” are appropriate given that a portion of the plant might resemble a lantern and that it grows on rocks. Members of the Andreaeopsida can be found growing at high latitudes and in chilly environments.

The Polytrichopsida is a pioneering family of plants that can thrive in challenging environments, and they make up the third group of mosses we are showcasing. When there has been a disturbance, such as a flood or fire, pioneer species are the first to reappear in the region. This category has a wide range of species, including the tallest moss in the world, Dawsonia superba, as well as small and large species.

The largest group of mosses, Bryopsida, which comprises 95% of all moss species, is the last group of mosses we’ll look at. This group is diverse, yet they all share a toothed spore capsule as a common feature. What? The capsule merely serves to preserve the spore, which disperses and develops into new mosses. When the time comes for the spores to disperse, the “ring of teeth” on these spore capsules helps them do so.

Question 1: Do mosses belong in the plant kingdom?

Mosses are non-flowering plants that release spores and have stems and leaves but no actual roots. They are ancient plants. Mosses are categorized as Bryophyta (bryophytes) in the plant kingdom, along with their relatives the liverworts and hornworts..

Question 2: What stage of the moss life cycle produces spores?

Question 3: What aspects of their life cycles do moss and ferns have in common?

Water is necessary for fertilizing both ferns and mosses. Without water, the sperm cannot reach the egg.

Question 4: What two kinds of mosses are there?

Pleurocarpous and Acrocarpous are two subgroups of moss that can be distinguished. Although there are other differences between the two groups, the main one is that acrocarpous grows upright while pleurocarpous moss spreads out like a carpet.

Question 5: What are the seven moss categorization levels?