The flower is the reproductive segment of angiosperms plants. It is an organ for sexual reproduction. A normal flower contains 4 different types of whorls. These whorls are organized consecutively on the bulged end of the pedicle (stalk) known as the receptacle (also known as the thalamus). Whorls of a flower are –

Actinomorphic: If a flower can be bisected radially into 2 equal halves by passing in any radial plane by moving across the center, then it is known as an actinomorphic flower, e.g., Datura, chili.

Zygomorphic: If a flower can be bisected into 2 equal halves in 1 vertical plane then it is known as a zygomorphic flower, e.g., Bean, Cassia.

Asymmetric: If a flower cannot be bisected into 2 equal halves in a vertical plane at any angle by moving across the center, eg: canna.

Bract resembles leaves and these are located at the base of the pedicle. If the Flowers are with bracts, then they are called bracteate and  If they are without bracts, ebracteate flowers.

Depending on the organization and location of the calyx, corolla, and androecium with reference to the ovary over the thalamus, the flowers are categorized as hypogynous flowers, perigynous flowers, and epigynous flowers. 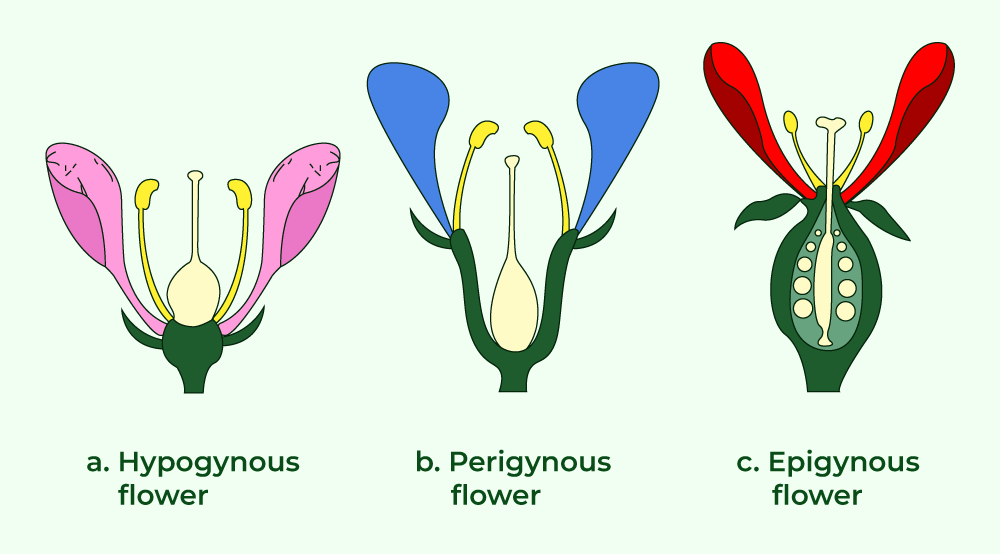 Hypogynous flower: In this flower gynoecium is situated at the higher position and the remaining parts are positioned below it. This type of ovary is considered as superior, e.g., Mustard, china rose.

Perigynous flower: In this flower gynoecium is located in the center and the remaining parts of the flower are positioned on the thalamus rim more or less at the same position. Here the ovary is considered as half inferior, e.g., Peach, Plum, rose.

Epigynous flower: In this flower, the thalamus margin grows upward surrounding the ovary totally, and getting merged with it, the remaining floral parts arise over the ovary. Thus, the ovary is considered inferior eg-Sunflower ray florets,  flowers of guava, and cucumber.

Parts of a Flower

A flower has 4 whorls calyx, corolla, androecium, and gynoecium.

The manner in which sepals or petals are organized in a floral bud with reference to other parts of the same whorl is called aestivation. 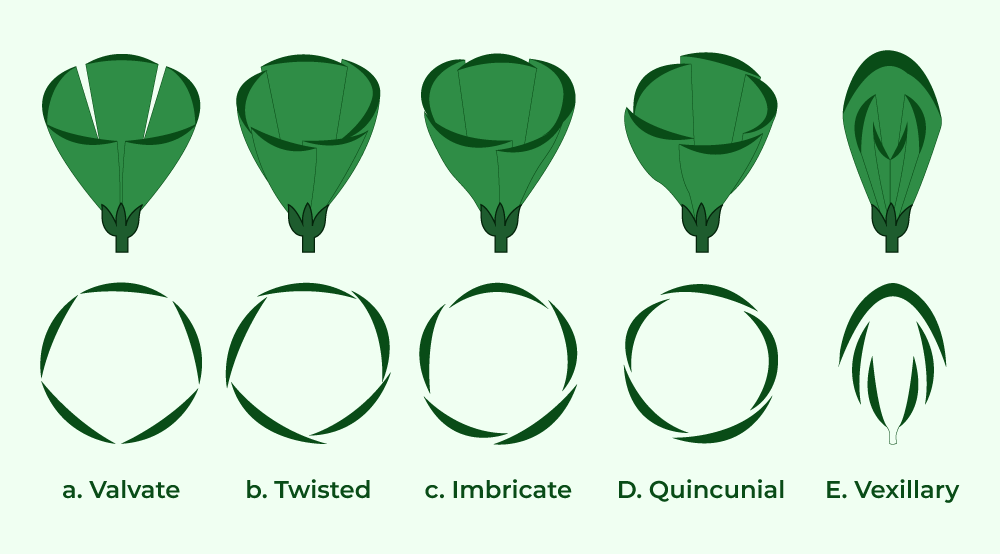 Valvate aestivation- In a whorl, if petals or sepals just touch each other at the ends i.e margin but do not overlap each other then this type of aestivation is termed as valvate. Example: Calotropis

Vexillary aestivation– Suppose for example in the flowers of a bean plant, there are 5 petals, of them, the largest in the standard petals. This standard petal overlaps the other 2 lateral petals, these lateral petals are termed wings. These wing petals again overlap the other two smallest anterior petals. These anterior petals are termed the keel. This type of aestivation is known as vexillary or papilionaceous. 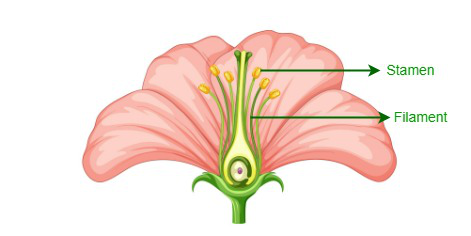 Androecium contains stamens. The stamen is the male reproductive organ of a flower. It contains a filament and an anther. In general, the anther contains 2 lobes (bilobed) and every lobe contains  2  chambers. These are called pollen-sacs. Pollen grains are produced inside these pollen sacs.

If a stamen is sterile, then it is known as staminode. These Stamens of a flower may get fused with other parts like petals or may get fused among themselves.

If the stamens in a flower are free and don’t adhere to each other, then they are said to be polyandrous. 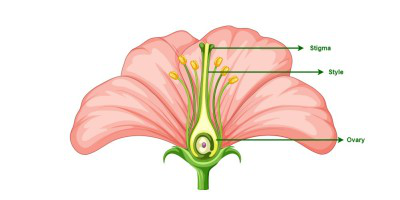 Gynoecium represents the female reproductive organ flower, and it contains one or many carpels. It contains three parts, they are stigma, style, and ovary.

The ovary bugles the basal part of the carpel, the style is present on this carpel. The style links stigma and ovary. The stigma is generally situated at the end of the style and is the receiving surface for pollen grains during the process of pollination. An ovary contains one or many ovules adhered to a flattened, cushion-like structure known as the placenta.

Question 1: What are aestivation and name different types of aestivation?

Question3:Mention different types of placentation with examples in tabulated form?

Question 4: Write examples of different types of symmetry in flowers?