Monocotyledonous leaves are limited and extended with equal venation, which is frequently used to recognize monocotyledonous plants from dicots. Monocot leaves are isobilateral as both the surfaces of the leaves are like a similar shading. The early-stage monocot leaves comprise a proximal leaf base or hypophyll and a distal hyperphyll. The hyperphyll is the prevailing piece of the leaf in dicots, however, in monocots, the hypophyll goes about as the predominant design. The leaves are limited and direct with a sheath covering around the stem at the base, yet there are numerous special cases inside monocots that probably won’t have comparative designs. The venation, as referenced, is of the striate sort which is generally longitudinally striate and once in a while, palmate-striate or pinnate-striate. The veins on the leaf surface arise at the foundation of the leaf and move together to the zenith. Most monocotyledonous plants comprise a solitary leaf for each hub in light of the fact that the leaf base possesses the greater part of the perimeter of the plant stem. The presence of a bigger leaf base has been credited to the distinctions in the improvement of the stem during zonal separation. 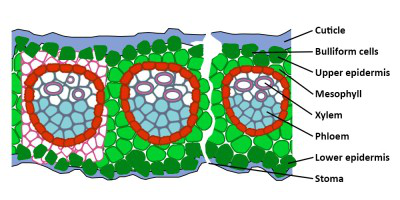 The furthest epidermal layer is available on the upper side of the leaf and the lower side of the leaf. It is a solitary layer of parenchymatous cells without intercellular spaces. The external walls of the cells are covered with the defensive layer, the fingernail skin. Stomata is available on both upper and lower epidermis layers. Some parenchymatous cells on the upper epidermis are huge and flimsy-walled. They are known as bulliform cells. Bulliform cells make the leaves twist during water pressure and assist with diminishing water misfortune because of vanishing.

Between the upper and lower epidermis, there is a whole mass of ground tissue called mesophyll. Not at all like the dicot leaf, no separation is seen in the mesophyll as palisade and supple parenchyma. The cells are comprised of parenchyma and are sporadically organized with intercellular spaces. These cells contain chloroplasts and can partake in the time spent in photosynthesis.

Beneath the undifferentiated mesophyll tissue, a solitary layer of the epidermis is available. This layer is available on the abaxial (lower) surface of the leaf. The cells are cubical or barrel in shape and are organized intently with practically no intercellular spaces. A similar number of stomata is available as in the upper epidermis. Through the stomata of the upper and lower epidermis trade of gases happen through the dispersion strategy. Simply over the stomata of the epidermal layers of both the surfaces of the leaf, air pits or sub-stomatal chambers are available. These air pits go about as a storage facility for carbon dioxide or water vapor till they diffuse.

Question 1: What number of cotyledons do the plant’s seeds have?

Inside the incipient organism of a plant’s seed, a design called the cotyledon gives energy and supplements to the youthful plant as it develops. In spite of the fact that plants generally make their own food through photosynthesis, they can’t do as such during the early piece of their turn of events. During this time, they get their supplements from structures like the cotyledon and substances like endosperm inside the seed.

The monocot, dicot, and cotyledon are like one another. This isn’t a happenstance — the names monocot and dicot depend on the number of cotyledons that each kind of plant has! The seeds of monocot plants have a solitary cotyledon, while the seeds of dicot plants have two cotyledons.

Question 2. What do the plant’s blossoms resemble?

The most conspicuous and recognizable component of numerous angiosperms is their blossoms. The presence of a plant’s blossoms is much of the time a decent sign of whether that plant is a monocot or a dicot. On the off chance that an angiosperm’s blossoms have three petals or bloom parts in products of three, it’s most probable a monocot. Lilies (plants in the sort Lilium) are genuine models — they ordinarily have extremely noticeable blossoms with six petals.

Question 3. How are vascular tissues organized in the plant’s stem?

The course of action of the vascular tissues inside a plant’s stem is another component that can assist you with recognizing it as a monocot or a dicot, yet these tissues aren’t typically noticeable to the unaided eye. Luckily, vascular tissues are organized in an unexpected way.

Vascular plants have two sorts of cylinder-formed vascular designs — phloem and xylem — organized in packs. Negative tension pushes water and broke down minerals up through the xylem, bringing the materials required for photosynthesis to the stem and leaves. Disintegrated sugars and natural mixtures (basically, the results of photosynthesis) travel through the phloem to parts of the plant where they can be put away for some time in the future.

Question 4. How does a monocot leaf develop?

In plants, most organs develop post-embryonically through cell division and cell extension. The coordination of these two development processes is by and large viewed as various among dicots and monocots. In dicot plants, for example, the model plant Arabidopsis, leaf development is most frequently portrayed as being transiently directed with cell division stopping prior at the tip and going on longer at the foundation of the leaf.

Question 5. Why do most monocot leaves don’t become wide?

There are two sorts of plant development, and the stem assumes a significant part in the two of them. Essential development happens in all gatherings when a plant becomes taller and when it creates roots, branches, leaves, and blossoms. Plants that go through just essential development and have delicate, green, non-woody stems are known as herbaceous plants. They normally have a yearly, biennial, or enduring life cycle, implying that they to some extent or totally bite the dust after a season and need to re-develop.

Question 6. What are the attributes of the monocot leaf?

Monocot leaves are normally lengthy and thin or elliptical with equal veins going through them. Be that as it may, the variety of nature uncovers numerous exemptions for this standard. There is typically one leaf for each hub on the stem on the grounds that the foundation of the leaf takes up the greater part of the outline of the stem. Monocot leaves have an equivalent number of stomata (pores) on the upper and lower leaf surfaces. They likewise have enormous vascular groups and bulliform (bubble-molded) cells on the upper surface. Both of these highlights assist monocots in withholding water during dry or upsetting ecological circumstances. Additionally, the fingernail skin layer is thicker on the upper leaf surface.

Question 7. For what reason are monocot leaves equal?