Consider Cocktail Party Problem or Blind Source Separation problem to understand the problem which is solved by independent component analysis. 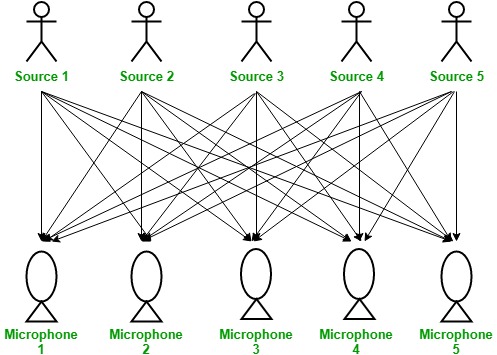 Here, There is a party going into a room full of people. There is ‘n’ number of speakers in that room and they are speaking simultaneously at the party. In the same room, there are also ‘n’ number of microphones placed at different distances from the speakers which are recording ‘n’ speakers’ voice signals. Hence, the number of speakers is equal to the number must of microphones in the room.
Now, using these microphones’ recordings, we want to separate all the ‘n’ speakers’ voice signals in the room given each microphone recorded the voice signals coming from each speaker of different intensity due to the difference in distances between them. Decomposing the mixed signal of each microphone’s recording into independent source’s speech signal can be done by using the machine learning technique, independent component analysis.
[ X1, X2, ….., Xn ] => [ Y1, Y2, ….., Yn ]
where, X1, X2, …, Xn are the original signals present in the mixed signal and Y1, Y2, …, Yn are the new features and are independent components which are independent of each other.

Difference between PCA and ICA –