In order to learn about Backpropagation, we first have to understand the architecture of the neural network and then the learning process in ANN. So, let’s start about knowing the various architectures of the ANN:

ANN is a computational system consisting of many interconnected units called artificial neurons. The connection between artificial neurons can transmit a signal from one neuron to another. So, there are multiple possibilities for connecting the neurons based on which the architecture we are going to adopt for a specific solution. Some permutations and combinations are as follows:

So let’s start talking about the various possible architectures: 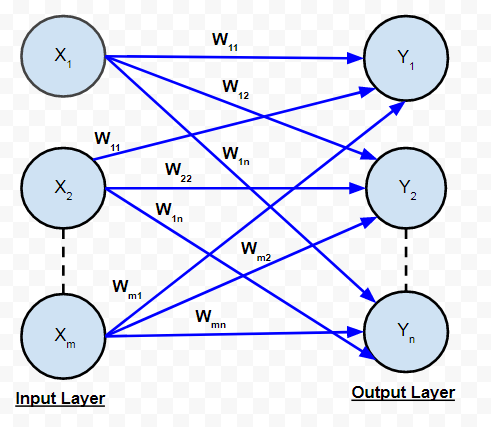 The net signal input to the output neurons is given by:

The signal output from each output neuron will depend on the activation function used. 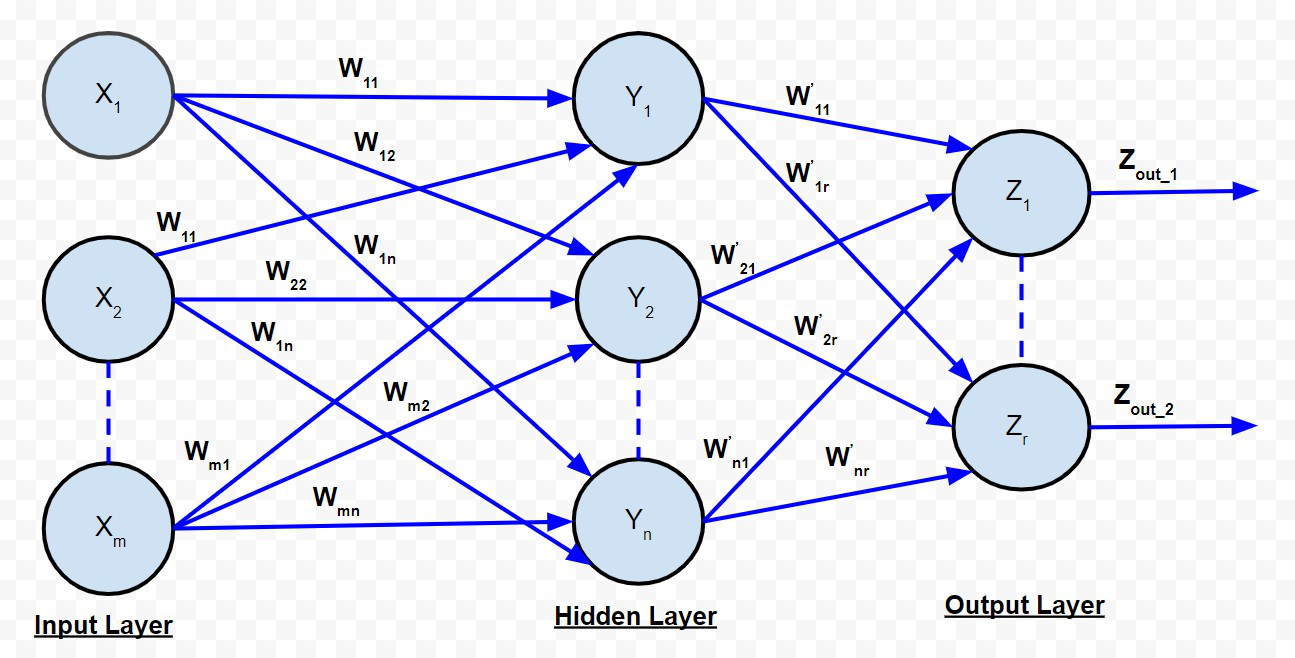 The multi-layer feed-forward network is quite similar to the single-layer feed-forward network, except for the fact that there are one or more intermediate layers of neurons between the input and output layer. Hence, the network is termed as multi-layer. Each of the layers may have a varying number of neurons. For example, the one shown in the above diagram has ‘m’ neurons in the input layer and ‘r’ neurons in the output layer and there is only one hidden layer with ‘n’ neurons.

for the kth hidden layer neuron. The net signal input to the neuron in the output layer is given by:

It is as same as the single-layer feed-forward network in structure. The only difference is that the output neurons are connected with each other (either partially or fully). Below is the diagram for this type of network. 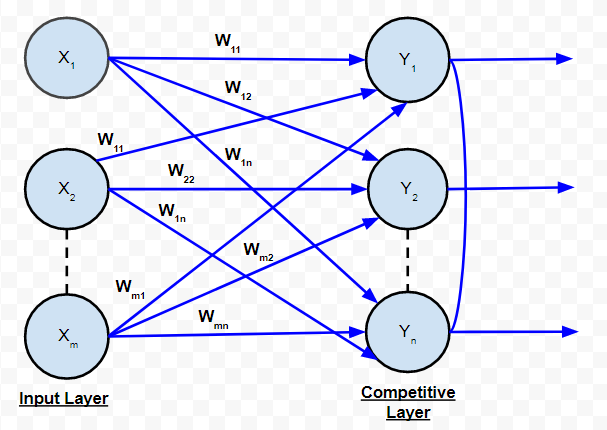 According to the diagram, it is clear that few of the output neurons are interconnected to each other. For a given input, the output neurons compete against themselves to represent the input. It represents a form of an unsupervised learning algorithm in ANN that is suitable to find the clusters in a data set. 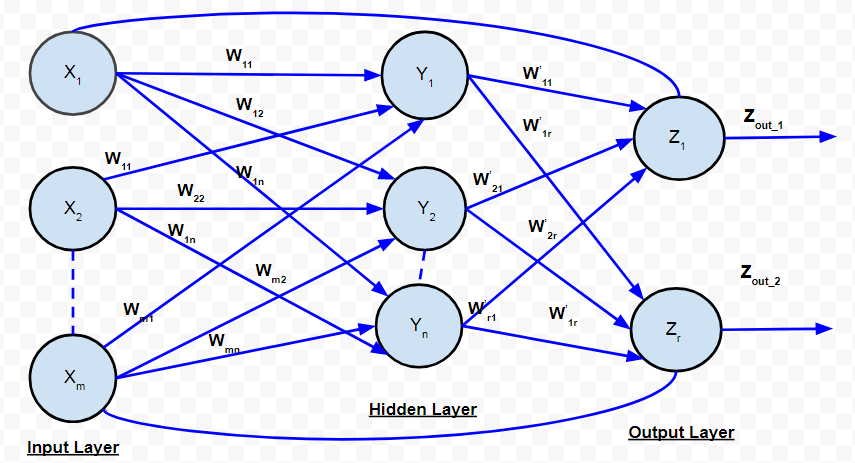 Learning process in ANN mainly depends on four factors, they are:

Multi-layer feed network is a commonly used architecture. It has been observed that a neural network with even one hidden layer can be used to reasonably approximate any continuous function. The learning methodology adopted to train a multi-layer feed-forward network is Backpropagation.

In the above section, we get to know that the most critical activities of training an ANN are to assign the inter-neuron connection weights. In 1986, an efficient way of training an ANN was introduced. In this method, the difference in output values of the output layer and the expected values, are propagated back from the output layer to the preceding layers. Hence, the algorithm implementing this method is known as BACK PROPAGATION i.e. propagating the errors back to the preceding layers.

The backpropagation algorithm is applicable for multi-layer feed-forward network. It is a supervised learning algorithm which continues adjusting the weights of the connected neurons with an objective to reduce the deviation of the output signal from the target output. This algorithm consists of multiple iterations, known as epochs. Each epoch consists of two phases:

The above diagram depicts a reasonably simplified version of the back propagation algorithm.

In order to understand the back propagation algorithm in detail, let us consider the Multi-layer Feed Forward Network.

The net signal input to the hidden layer neurons is given by:

The net signal input to the output layer neurons is given by: 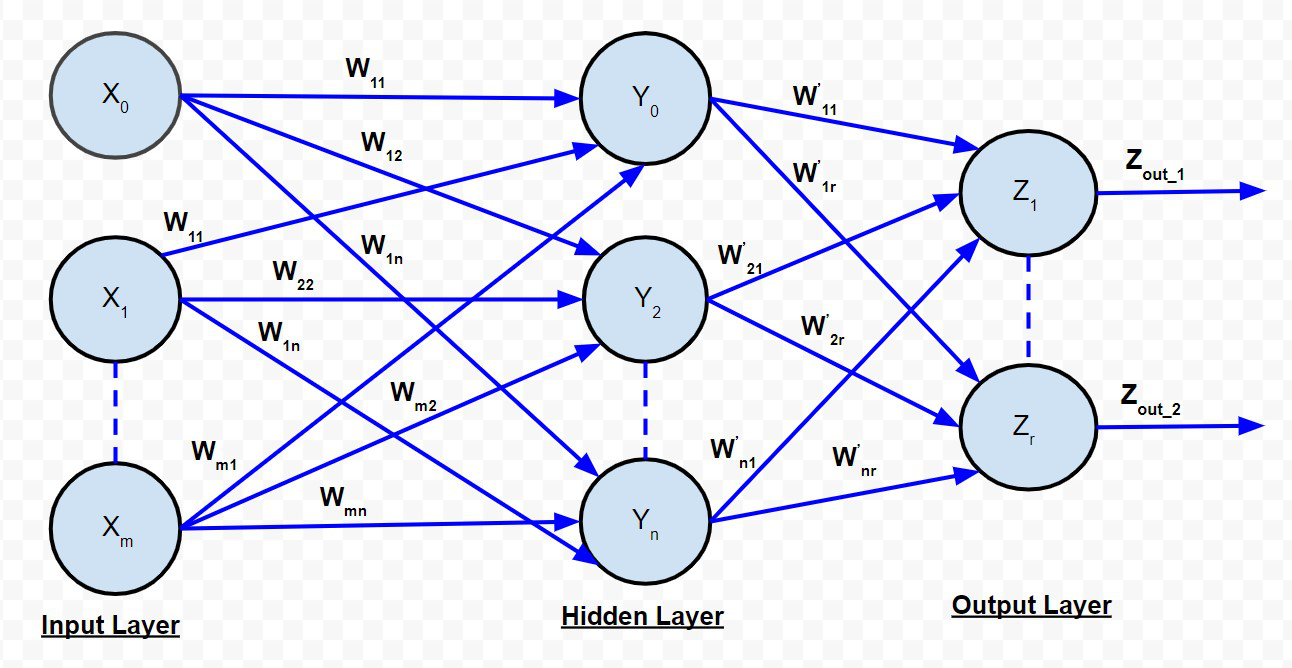 Note that the signals

If is the target of the k-th output neuron, then the cost function defined as the squared error of the output layer is given by:

According to the descent algorithm, partial derivative of cost function E has to be taken with respect to interconnection weights. Mathematically it can be represented as:

as a component of the weight adjustment needed for weight

corresponding to the k-th output neuron, then :

On the basis of this, the weights and bias need to be updated as follows:

Like the above expressions, we can deduce the expressions for “Interconnection weights between the input and hidden layers:

So, in this way, we can use the Backpropagation algorithm to solve various Artificial Neural Networks.