Kernel is the core part of an operating system that manages system resources. It also acts as a bridge between the application and hardware of the computer. It is one of the first programs loaded on start-up (after the Bootloader). 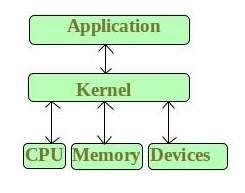 Kernel mode and User mode of CPU operation
The CPU can execute certain instructions only when it is in kernel mode. These instructions are called privilege instruction. They allow the implementation of special operations whose execution by the user program could interface with the functioning of the operating system or activity of another user program. For example, instruction for managing memory protection.

The concept of modes can be extended beyond two, requiring more than a single mode bit CPUs that support virtualization use one of these extra bits to indicate when the virtual machine manager, VMM, is in control of the system. The VMM has more privileges than ordinary user programs, but not so many as the full kernel.

System calls are typically implemented in the form of software interrupts, which causes the hardware’s interrupt handler to transfer control over to an appropriate interrupt handler, which is part of the operating system, switching the mode bit to kernel mode in the process. The interrupt handler checks exactly which interrupt was generated, checks additional parameters ( generally passed through registers ) if appropriate, and then calls the appropriate kernel service routine to handle the service requested by the system call.

User programs’ attempts to execute illegal instructions ( privileged or non-existent instructions ), or to access forbidden memory areas, also generate software interrupts, which are trapped by the interrupt handler, and control is transferred to the OS, which issues an appropriate error message, possibly dumps data to a log ( core ) file for later analysis, and then terminates the offending program. 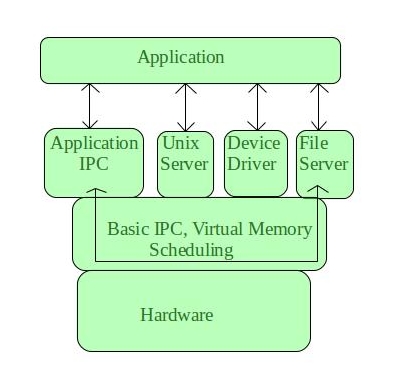 It provides minimal services of process and memory management. The communication between client program/application and services running in user address space is established through message passing, reducing the speed of execution microkernel. The Operating System remains unaffected as user services and kernel services are isolated so if any user service fails it does not affect kernel service. Thus it adds to one of the advantages of a microkernel. It is easily extendible i.e. if any new services are to be added they are added to user address space and hence require no modification in kernel space. It is also portable, secure, and reliable.

Eclipse IDE is a good example of Microkernel Architecture.

Read next – Monolithic Kernel and key differences from Microkernel