The cell is the primary structural and functional unit of all living organisms. Biomolecules such as proteins and nucleic acids are found in the cytoplasm of each cell, which is encircled by a membrane.

Protein synthesis, DNA repair, replication, and motility are just a few of the tasks that cells can carry out within the cell and for which they can evolve specialised functionalities. Cells can specialise and migrate around within the cell. The bulk of cells is measured in micrometres due to their modest size.

Consequently, a microbody is a cytoplasmic organelle with an approximately spherical form. They are compounds-degrading enzymes that are contained in a single membrane. They are believed to function as momentary centres of metabolic activity. Microbodies can take many different shapes. Among these are Woronin bodies, peroxisomes, glycosomes, and glyoxysomes.

These “microbodies” are the bodily components found in a cell’s cytoplasm. They are also referred to as cytosomes. A microbody is typically a spherical vesicle with a diameter of between 0.2 and 1.5 micrometres. Microbodies can be seen in a cell’s cytoplasm, however, they can only be viewed under an electron microscope. They are surrounded by a single phospholipid bilayer membrane and have an intracellular protein and enzyme matrix, but it doesn’t appear that they have any genetic material that would allow them to self-replicate. 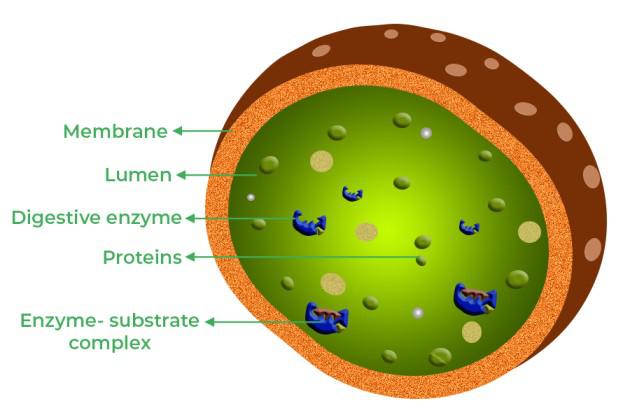 The enzymes found in microbodies participate in the preliminary or intermediate stages of a variety of biochemical processes taking place inside the cell. These enzymes promote the oxidation of fatty acids, alcohols, and amino acids. Microbodies often play a big role in plants’ photorespiration and peroxide detoxification. Microbodies are divided into categories based on their functions. Important microbodies include the following: Woronin bodies, Glyoxysomes, Peroxisomes, and Glycosomes.

The glycosome is a membrane-enclosed organelle that houses the glycolytic enzymes and a substantial proteinaceous matrix. A few protozoan species that cause Leishmania, Chagas’s disease, sleeping sickness, and other human pathogenic trypanosome diseases have glycosomes. According to theory, it descended from the peroxisome. Peroxisomal and glycolysis enzymes are found in glycosomes.

The woronin body is a dense core microbody produced from peroxisomes that are shielded by a double-layered membrane. It bears the name Mikhail Stepanovich Woronin, a Russian botanist. In filamentous Ascomycota, it is found close to the septae that divide the hyphal compartments. These entities’ primary purpose is to close off the septal pores after hyphal injury. It prevents cytoplasm from being lost in the areas of damage. The woronin bodies can range in size from 100 nm to more than 1 μm. In certain species, they are visible under a light microscope.

The Zellweger syndrome spectrum (ZSS) disorders and rhizomelic chondrodysplasia punctata (RCDP) type 1 are two clinically distinct subtypes of the diverse set of autosomal recessive human illnesses known as peroxisome biogenesis disorders (PBDs). At least 14 different PEX genes, which encode proteins involved in peroxisome assembly and proliferation, can develop abnormalities, which lead to PBDs. These ZSS diseases are linked to thirteen of these genes. Different approaches to finding the causal gene abnormalities have been developed as a result of the genetic variety across PBDs and the impossibility to determine which of the 13 known PEX genes is deficient from the biochemical and clinical characteristics of a patient with ZSS. The most frequently mutant exons of the various PEX genes are examined in a PEX gene screen, which also includes PEX cDNA transfection complementation experiments and sequencing of the PEX genes thus discovered. The advantages of DNA testing for PBDs include carrier screening for close family members, early prenatal testing or preimplantation genetic diagnosis in families at risk for ZSS illnesses, and insight into genotype-phenotype correlations, which may eventually help to enhance patient care.

Question 1: Which tasks does the peroxisome do primarily?

Question 2: What are microbodies?

Some eukaryotic creatures have a specific form of organelle-like body called a microbody (plants and animals). These entities, which have a vesicle-like spherical form and contain enzymes for unusual biological processes, are found in the cell cytoplasm (such as alpha oxidation of fatty acids). Peroxisomes (found in human and other animal cells), glycosomes (found in protozoan cells), glyoxysomes (found in plant cells), woronin bodies, etc. are a few examples of the recognised microbodies found in eukaryotes.

Question 3: What function do microbodies play in eukaryotic cells?

Throughout the animal and plant kingdoms, microbodies have a variety of functions. Here are a few of them:

Question 4: Explain the distinction between peroxisomes and glyoxysomes.

The term “inborn mistakes” refers to the inheritance of defective genes that might result in rare genetic illnesses in the offspring and disrupt or only partially normalise the metabolic processes of the cell. Galactosemia is a common example of an inborn error; other inborn mistakes are more uncommon. Microbody-related inborn mistakes are rather few. However, in humans, the peroxisome can acquire biogenesis problems that can result in a wide range of secondary illnesses, such as hepatomegaly, aberrant bone calcification, etc.

Question 6: Which function do peroxisomes serve in plants?