Method in Java or Java Method is a collection of statements that perform some specific task and return the result to the caller. A Java method can perform some specific task without returning anything. Methods in Java allow us to reuse the code without retyping the code. In Java, every method must be part of some class that is different from languages like C, C++, and Python.

1. A method is like function i.e. used to expose behavior of an object.
2. it is a set of codes that perform a particular task.

Note: Methods are time savers and help us to reuse the code without retyping the code.

1. Modifier: It defines the access type of the method i.e. from where it can be accessed in your application. In Java, there 4 types of access specifiers.

2. The return type: The data type of the value returned by the method or void if does not return a value.

3. Method Name: the rules for field names apply to method names as well, but the convention is a little different.

4. Parameter list: Comma-separated list of the input parameters is defined, preceded with their data type, within the enclosed parenthesis. If there are no parameters, you must use empty parentheses ().

5. Exception list: The exceptions you expect by the method can throw, you can specify these exception(s).

6. Method body: it is enclosed between braces. The code you need to be executed to perform your intended operations.

Types of Methods in Java

There are two types of methods in Java:

1. Predefined Method: In Java, predefined methods are the method that is already defined in the Java class libraries is known as predefined methods. It is also known as the standard library method or built-in method. We can directly use these methods just by calling them in the program at any point.

2. User-defined Method: The method written by the user or programmer is known as a user-defined method. These methods are modified according to the requirement.

Method Signature of the above function:

How to Name a Method?

Rules to Name a Method

Generally, a method has a unique name within the class in which it is defined but sometimes a method might have the same name as other method names within the same class as method overloading is allowed in Java.

The method needs to be called for using its functionality. There can be three situations when a method is called:
A method returns to the code that invoked it when:

The control flow of the above program is as follows: 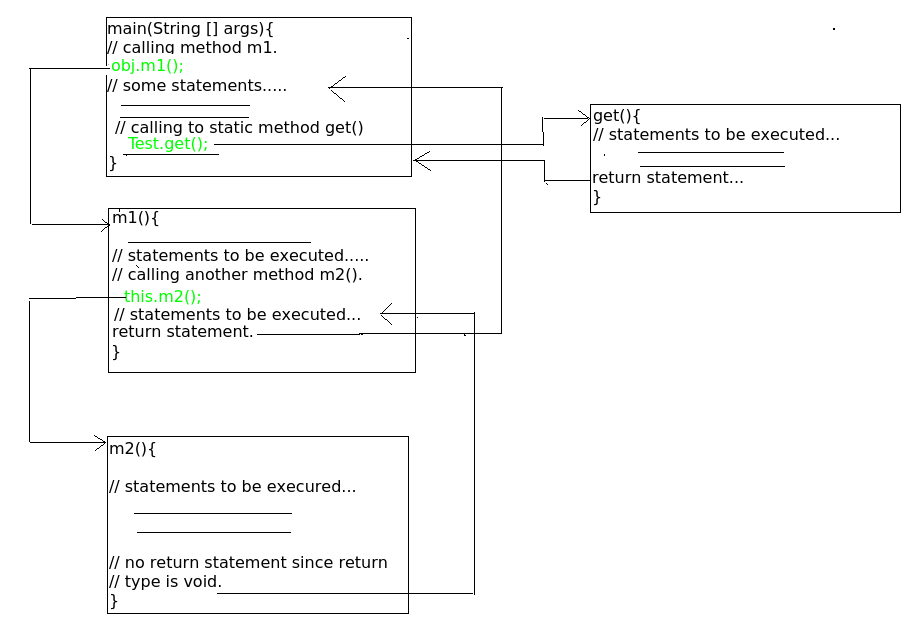 Methods calls are implemented through a stack. Whenever a method is called a stack frame is created within the stack area and after that, the arguments passed to and the local variables and value to be returned by this called method are stored in this stack frame and when execution of the called method is finished, the allocated stack frame would be deleted. There is a stack pointer register that tracks the top of the stack which is adjusted accordingly.

This article is contributed by Nitsdheerendra. If you like GeeksforGeeks and would like to contribute, you can also write an article using write.geeksforgeeks.org or mail your article to review-team@geeksforgeeks.org. See your article appearing on the GeeksforGeeks main page and help other Geeks. Please write comments if you find anything incorrect, or if you want to share more information about the topic discussed above.