Methane compound consists of 4 Hydrogen atoms and a Carbon atom. Carbon is a non-metallic chemical element with atomic number 6 and is represented by the symbol C. It belongs to group-14 in the periodic table. It is a nonmetallic and tetravalent-making four electrons available to form chemical bonds. Hydrogen is a colorless, odourless, non-toxic, and flammable gas. It is the lightest element with atomic number 1. Hydrogen is a diatomic with the formula H2.

Methane is the simplest saturated hydrocarbon with the chemical formula CH4. It is the simplest Alkane that had one carbon and four hydrogen atoms. Methane was first scientifically identified by Alessandro Volta, an Italian physicist in the year 1776. It was odorless, colorless, and flammable non-toxic gas. Methane is a tetrahedral molecule as it has four equivalent C-H bonds. It is produced by colonic anaerobes. 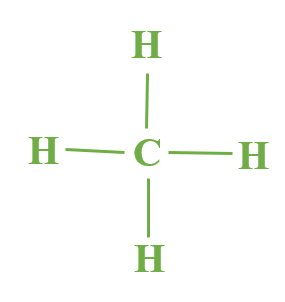 Yes, It is bad for environment. If it spills out from the leaky pipe before it being used then it absorbs the heat from the sun that leads to warming up the temperature of atmosphere causes greenhouse effect.

Question 2: What is the main cause for the release of methane gas?

Question 3: Is methane harmful to humans?

Methane gas alone is not toxic. But when it reacts with other gases it become deadly. Methane displaces oxygen to induce asphyxiation which cause dizziness and headache but these frequently go unnoticed until the brain signals the body gasping for air.

Question 4: Is it possible to extract methane from the atmosphere?

Yes bacteria is used to extract methane from air. As it is a greenhouse gas, elimination of methane is financially competitive with carbon capture even if the technologies themselves are more expensive.

Question 5: What is the tetrahedral bond angle of methane?

The tetrahedral bond angle of methane is 109.5°. As per the valence shell electron pair repulsion theory, It is the molecular structure with minimum mutual repulsions.

Question 6: How does methane compare to carbon dioxide as a greenhouse gas?

Methane is far less abundant than carbon dioxide but it is ore potent molecule for a molecule as a green house gas when you balance out there differences in concentrations and amount of light absorbed methane is roughly a third as powerful as CO2 in warming the atmosphere.

Question 7: What chemical compound is used to remove methane in the atmosphere?

As methane is a greenhouse gas, it is necessary to remove it from atmosphere. Zeolite, an abundant clay is used to control the methane emissions and to remove from air. Zeolite absorbs the methane from air when passes through it. It is mostly used as absorbents and catalysts as it is inexpensive.