Prerequisite – MERGE Statement
As MERGE statement in SQL, as discussed before in the previous post, is the combination of three INSERT, DELETE and UPDATE statements. So if there is a Source table and a Target table that are to be merged, then with the help of MERGE statement, all the three operations (INSERT, UPDATE, DELETE) can be performed at once.

A simple example will clarify the use of MERGE Statement.

Example:
Suppose there are two tables:

The task is to update the details of the products in the PRODUCT_LIST as per the UPDATED_LIST.

Solution
Now in order to explain this example better, let’s split the example into steps. 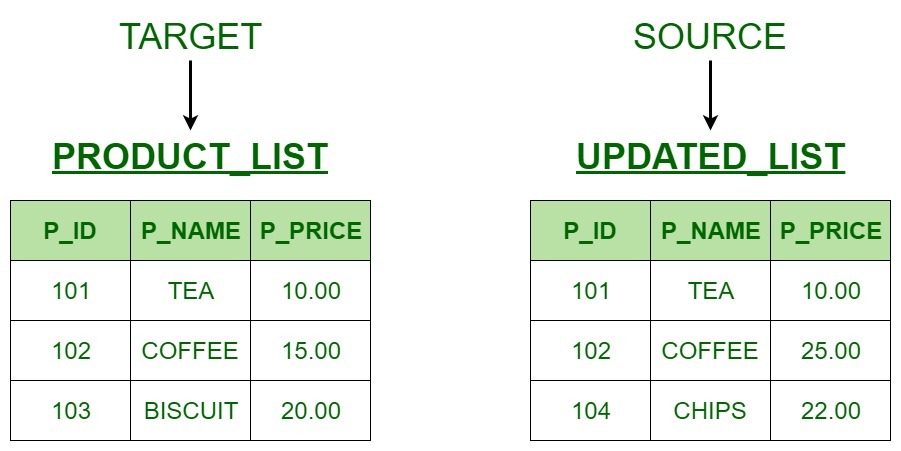 Step 2: Recognise the operations to be performed.
Now as it can be seen that there are three mismatches between the TARGET and the SOURCE table, which are:

2. There is no BISCUIT product in SOURCE but it is in TARGET

3. There is no CHIPS product in TARGET but it is in SOURCE

Therefore, three operations need to be done in the TARGET according to the above discrepancies. They are:

Note: Refer this post for the syntax of MERGE statement.

The SQL query to perform the above-mentioned operations with the help of MERGE statement is:

So, in this way all we can perform all these three main statements in SQL together with the help of MERGE statement.

Note: Any name other than target and source can be used in the MERGE syntax. They are used only to give you a better explanation.