Mercury is also known as quicksilver. It is a naturally present element found in rocks and coal deposits. The word mercury comes from the Greek word hydrargyrum means water and silver. Mercury has the symbol Hg with the atomic number 80. It is a liquid metal belonging to group 12 of the periodic table. It has an atomic mass of 200.59u and a melting point of -38.83˚C.
Nitrogen is essential to all living organisms. When nitrogen combines with oxygen it naturally forms a nitrate compound. Most of all inorganic nitrates can be soluble in water. It has a molar mass of 62.0049 g/mol. It is a polyatomic ion with a chemical formula of NO3–. It is used in fertilizers and pharmaceutical drugs.

Mercury II Nitrate is a toxic chemical compound, even though it is sometimes used as a reagent. It has the appearance of a white crystalline solid and it is soluble in water. The density of mercury II nitrate is 4.3 g/cm3. It is also called Mercuric Nitrate, Mercury dinitrate. It can cause an explosion when it exposes to higher temperatures for a long time and produces toxic oxides of nitrogen when it decomposes by heating. Adequate safety measures should be applied when working with this compound. Due to its high toxicity and hazards, it is restricted in many countries. 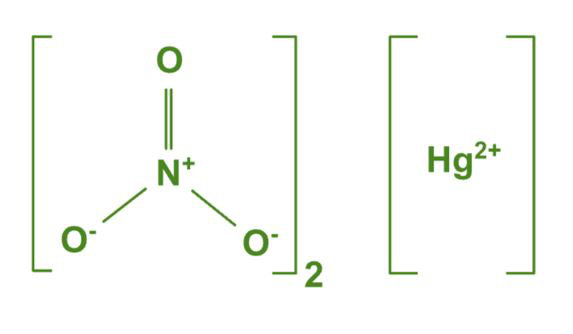 The physical properties of Mercury (II) Nitrate are:

Uses of Mercuric (II) Nitrate are:

The hazards related to Mercury (II) Nitrate are:

The safety measures related to Mercury (II) Nitrate are:

Question 1: What are the various kinds of emergency treatment estimates that ought to be given to an individual in the event that they interact with mercury II nitrate?

Question 2: What are the things to be held within proper limits while putting away mercury II nitrate?

It ought to be avoided food and feedstuffs, combustible substances, diminishing specialists, and flammable substances. Keep in the shadows. Store where there is no admittance to a channel or sewer. Arrangement for containing putting out fires profluent. Shut unsettled. Just keep the first holder. The capacity temperature ought to be low as an excessive amount of intensity can cause it to respond causing a blast.

Question 3: Nitrogen dioxide is the gas that develops during the heat breakdown of mercury II nitrate. Is the gas hurtful to people?

As nitrogen dioxide is a noxious gas, higher dosages are known to be destructive to people. It can possibly harm the respiratory system, particularly the lungs, as well as raise the gamble of respiratory diseases and asthma. Long haul nitrogen dioxide gas openness can likewise cause actuate lung diseases.

Question 4: What is mercury II oxide?

Mercury II oxide or mercury oxide is a red or orange solid. It is an inorganic compound that decomposes into mercury metal and oxygen gas when heated. HgO is the formula of mercury oxide. It has a molar mass of 216.59 g/mol and a melting point of 500°C. it reacts with acids and is insoluble in alcohols. It is a highly toxic substance and may have kidney effects, irritating the eyes, skin, and respiratory tract. It is used in marine and porcelain paints, dry batteries, and chemical reagents. It plays a significant role in the production of mercury.

Question 5: What is mercury used for?

Mercury is the rarest element in the earth’s crust. Some of the uses of the mercury are,

Question 6: Are nitrates harmful to humans?

Nitrates are somewhat idle, and that implies they’re steady and far-fetched to change and harmful. Microbes in the mouth or enzymes in the body can change over them into nitrites, and these might be hurtful. Thus, nitrites can either transform into: nitric oxide, which is useful for the body.