Mendel’s Experiments and Laws of Inheritance

Gregor Johann Mendel (1822-1884) was an Austrian scientist, teacher, and Augustinian prelate who lived in the 1800s.  He was educated in a monastery and went on to study science and mathematics at the University of Vienna. He failed an exam for a teaching certificate but did not suppress his zeal for the scientific quest. He went back to his monastery and started growing peas. Mendel blended his knowledge of science and mathematics and became the first one to keep count of individuals exhibiting a particular trait in each generation. This helped him to arise the laws of inheritance.

He reveals that there are 7 different traits

Mendel worked on inheritance. Inheritance is genetic qualities that transfer from parent to offspring. Mendel took pea plants with different characteristics example-tall/short plants, white/violet flowers, etc. First, he took short (tt) and tall plants (TT) and produced progeny from them by self-pollination. He observed in the F1 generation, all tall offspring (Tt). Then he took two tall plants (Tt ) from the F1 generation and produced progeny then he observed the result of three tall plants (Tt) and one short plant (tt).

He concludes that transmission of genes in the generation. 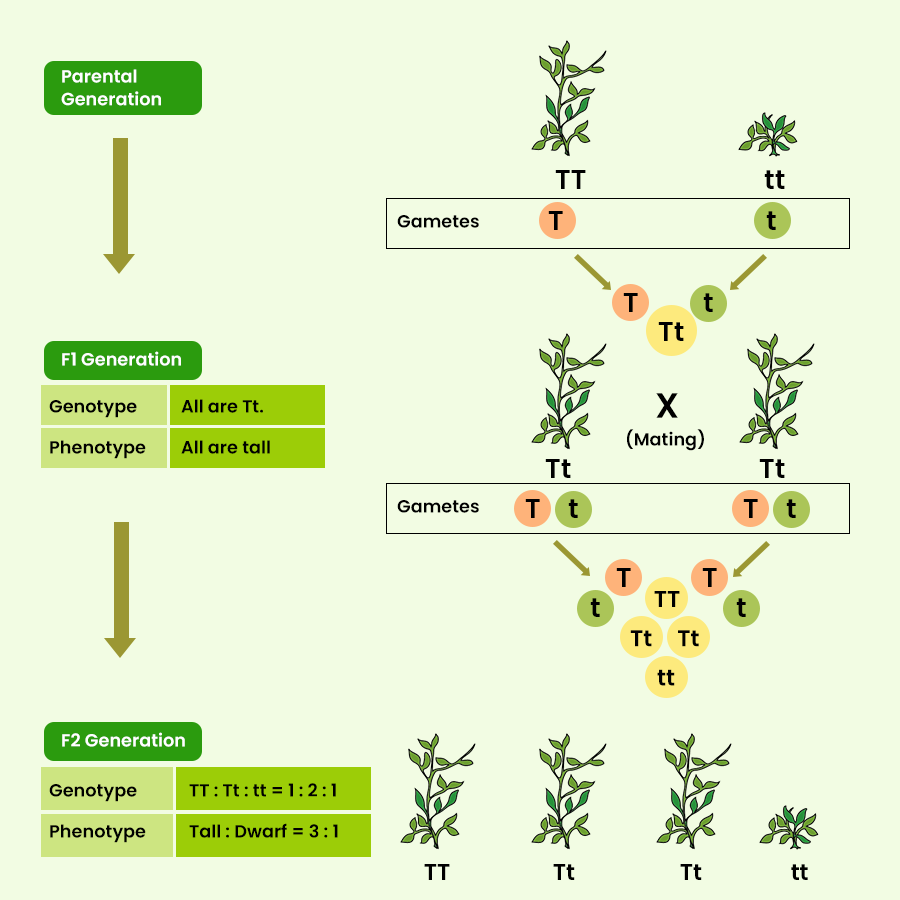 It is a cross in which only one character is considered at a time, e.g. in a cross between a tall and dwarf plant, the size of the stem is considered. Mendel made a cross between a pure tall (TT) and a pure dwarf (tt) pea plant. He obtained all tall (hybrid) plants in the F1 generation. On self, these plants produced tall and dwarf in the ratio 3:1 The genotypic ratio of 1:2:1 and the phenotypic ratio of 3:1 is termed the monohybrid ratio. It is a single cross between two organisms of a species that is made to study the inheritance of single pairs of genes or factors. This cross helps to study the principle of dominance given by Mendel 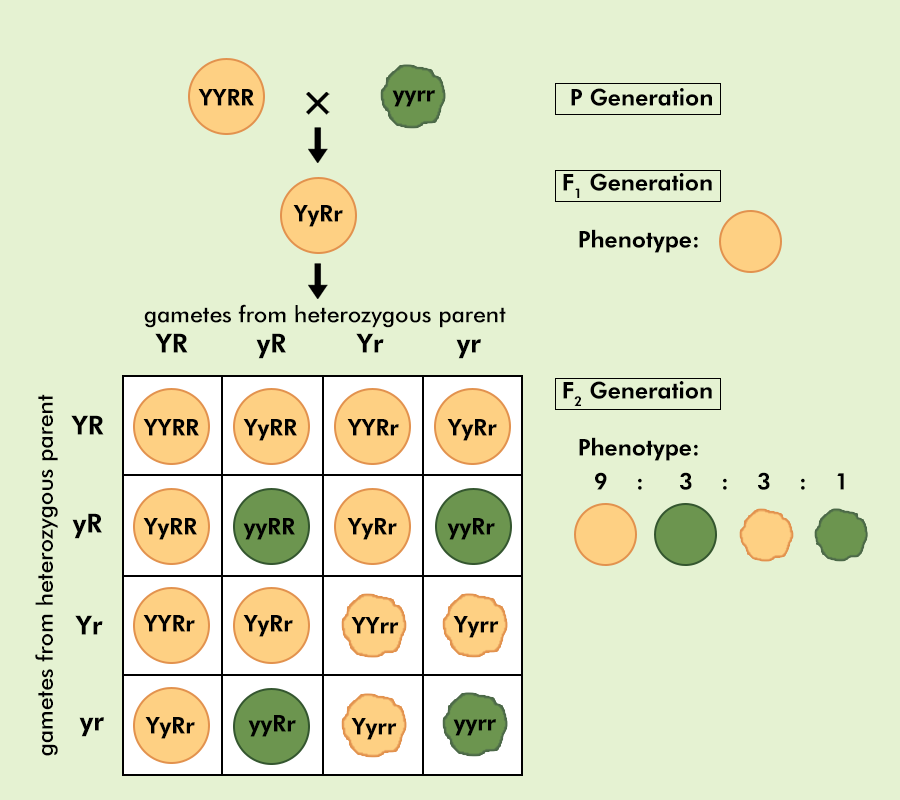 It is a cross between two individuals taking two contrasting traits at a time. It helps to study the inheritance of two pairs of alleles. The genotypic ratio in the F2 generation is 1:2:2:4:1:2:1:2:1 and the phenotypic ratio in the F2 generation is 9:3:3:1 This cross helps to study the principle of Independent assortment given by Mendel. For example – the cross between pea plants having yellow wrinkled seeds with those having green round seeds is a dihybrid cross.

Why did Mendel choose only the pea plant?

Mendel had given three laws of inheritance to follow as –

The law of segregation states that for any trait, each pair of alleles of a gene split, and one gene passes from each parent to an offspring. Two alleles do not mix when they come together in hybrid pair and are independent of each other.

Question 1: What is a gene? What is the nature of genes?

Term Gene was given by Jo hansen (1900). It is a hereditary determiner specifying a biological function; a unit of inheritance (DNA) located in a fixed place on the chromosome is called a Gene. Mendel considered every character as a unit which is controlled by a factor, presently called a gene.  Chemically, a gene is a segment of DNA that controls one character and physically is a part of the chromosome.

Question 2: Where are genes located? What is the chemical nature of genes?

Genes are located on chromosomes. Chemically, a gene is a segment of DNA (Deoxyribose nucleic acid)

According to Kolreuter, basic features of inheritance are –

Question 4: What are alleles?

Two alternatives of the same genes at the same locus in a pair of homologous chromosomes are termed alleles. It is an abbreviated form of allelomorph.

Question 5: What is a dominant gene?

A gene that expresses itself in the presence of its contrasting gene in a hybrid is termed a dominant gene.

Question 6: What is a recessive gene?

It is that whose expression is suppressed in the presence of the dominant gene. For example—in a hybrid (Tt) tall plant, t gene for dwarfness is recessive and T gene for tallness is dominant.