There are 2 sorted arrays A and B of size n each. Write an algorithm to find the median of the array obtained after merging the above 2 arrays(i.e. array of length 2n). The complexity should be O(log(n)). 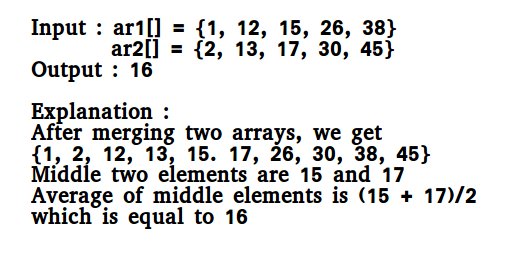 Note: Since the size of the set for which we are looking for the median is even (2n), we need to take the average of the middle two numbers and return the floor of the average.

Use the merge procedure of merge sort. Keep track of count while comparing elements of two arrays. If count becomes n(For 2n elements), we have reached the median. Take the average of the elements at indexes n-1 and n in the merged array. See the below implementation.

Method 2 (By comparing the medians of two arrays)

This method works by first getting medians of the two sorted arrays and then comparing them.
Let ar1 and ar2 be the input arrays.

Let us repeat the process for above two subarrays:

m1 is greater than m2. So the subarrays become

This method works by merging two arrays without extra space and then sorting them.

Please write comments if you find the above codes/algorithms incorrect, or find other ways to solve the same problem.