Excretion is the process through which an organism gets rid of waste substances. This is mostly done by the skin, kidneys, and lungs in vertebrates. In contrast, when a material is secreted, it may carry out specified functions after exiting the cell. All types of life require the process of excretion.

Formation of the urine 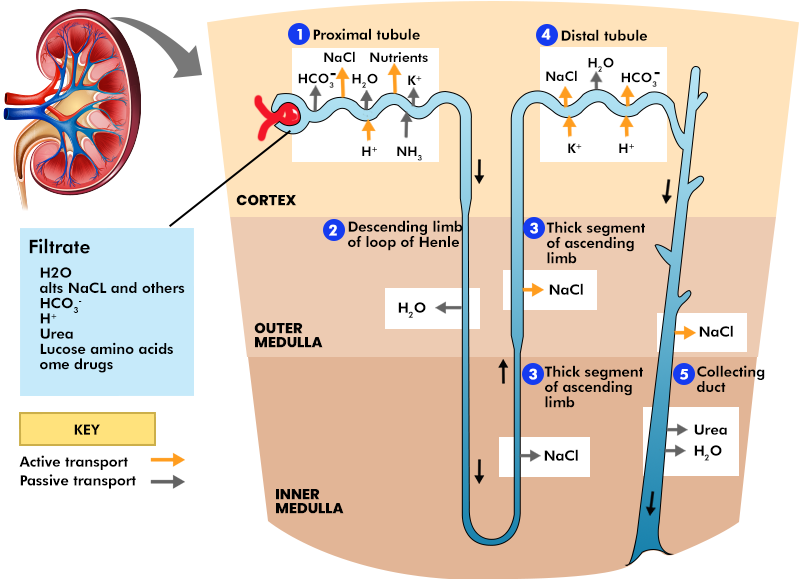 Glomerular filtration starts whenever blood would enter the glomerulus by an afferent arteriole. In contrast to proteins leaving through the efferent arteriole, waste products and the water would enter the glomerulus and blood cells. The renal filters usually between 1100 to twelve hundred ml of blood per minute in the glomerulus Three layers of capillary blood pressure force the blood to separate the initial endothelium, which encircles the glomerular blood vessels, is a layer. The following Bowman’s capsule epithelium is the layer, and a basement membrane separates it from the

The Bowman’s capsule’s epithelial cells, known as podocytes, are organized in a complex pattern to leave behind certain tiny openings called slit pores or filtering slits. The quantity of filtrate the kidneys generate each minute would be called filtration of the glomerulus.

Both beneficial and toxic compounds are carried in the blood that the afferent arterioles deliver to the glomerular capsule. The beneficial elements include glucose, amino acids, vitamins, hormones, electrolytes, and ions, whereas the detrimental elements include metabolic wastes including urea, uric acid, creatinine, and ions.
Efferent arterioles have a smaller diameter than afferent arterioles. The hydrostatic pressure that results from blood exiting the glomerulus is caused by this variation in artery diameter.

Useful components, such as some water, electrolytes, and organic nutrients like glucose, amino acids, vitamins, hormones, etc. are preferentially recycled back from the filtration back to the bloodstream in the proximal convoluted tubule as it travels to the renal tubules. While certain chemicals are actively moved, others undergo passive absorption. Osmosis allows a large fraction of water to be reabsorbed.
Only 60–70% of the filtrate makes it to the Henle loop. Only 15 to 20 percent of the initial filtration enters the distal convoluted tubule because a large portion of this, particularly water, sodium, and chloride, is taken up in the loop. The filtrate that enters the collecting ducts is really rather diluted because more electrolytes, particularly sodium, are reabsorbed at this location. The collecting ducts’ primary job is to reabsorb as much fluid as the body requires. Active transport helps nutrients like glucose, amino acids, and vitamins to be reabsorbed. Negatively charged ions are often reabsorbed through passive transport, although positively charged ions can also be reabsorbed through active transport. Osmosis is used to reabsorb water, whereas pinocytosis is used to reabsorb tiny proteins.

Secretion is the last stage in the production of urine. To keep the ionic and acidity equilibrium of the bodily fluids, potassium, hydrogen, and ammonia ions are released.

The role of tubules Simple cuboidal brush boundary epithelium in proximal convoluted tubules (PCT) offers a bigger space for reabsorption surfaces. Most of the electrolytes and water in PCT are reabsorbed. It helps to keep the body’s pH and ionic balance in check. by secreting hydrogen ions, potassium ions, and ammonium ions from fluids Into filtrate. To ensure that wastes like creatine or excessive Hydrogen ion or excessive Potassium ions are effectively released into the filtrate to be expelled, tubular secretion occurs first from the blood inside the peritubular capillaries towards the filtration in the renal tubules.
In exchange for the Na+ ions being reabsorbed, more Potassium ions are secreted in the tubules, which leads to the clinical situation known as hyperkalemia. Hydrogen ion (H+) production from the tubules is crucial for preserving a normal blood pH. Due to the brief time that substances like spend in the glomerulus, medications like penicillin and aspirin may not be completely removed from the blood. Such chemicals are eliminated via secretion into the filtration inside the convoluted tubules first from peritubular capillaries.

This mechanism is essential for preserving the fluid’s osmolarity. Reabsorption in the ascending limb is extremely little. It is electrolyte-permeable yet impervious to water. The vast bulk of the water is absorbed by the descending limb, The filtrate is concentrated. Nearly all substances cannot pass through the descending limb-electrolytes. As a result, Henle’s loop’s various components absorb differently.

A lot of water is reabsorbed by the collecting duct. Urine concentration. Along with potassium ions, it also would secrete the ions of hydrogen ions. It maintains the pH and ionic equilibrium of the blood.

Question 1: Describe the differences between glomerular filtrate and urine in terms of composition?

It can be extrapolated that 99 percent of the filtrate must be recycled back by the renal tubules when the quantity of the filtrate is compared to that of the urine produced each day, which is 180 liters and 1.5 liters, respectively. This process is known as reabsorption. Because they are rapidly recycled back in the filtrate, substances including amino acids, Na+, and glucose are not present in urine.

Question 2: What part does tubular secretion play in preserving the ionic and acid-base balance of bodily fluids?

During the production of urine, the tubular cells release ammonia, Hydrogen ion, and Potassium ions into the filtrate. Urine generation requires tubular secretion, which also aids in preserving the ionic and acid-base equilibrium in bodily fluids. Ammonium, H+, and K+ are selectively secreted into the filtrate by the PCT to assist in this process. The DCT is also capable of secreting potassium, hydrogen, and ammonia ions with sufficient selectivity to maintain the pH balance of sodium and potassium in the blood. By releasing just H+ and K+ ions, another structure aids in preserving the pH and osmotic equilibrium of the blood.

Question 3: Why does the glomerular filtrate in the Henle loop become concentrated in the descending limbs and dilute in the ascending limbs?

The Henle’s loop’s thin wall is sensitive to water but not to solutes. The higher osmolarity of the medulla interstitium, from which the limbs extend, causes exosmosis, which causes the tonicity tubular fluid to gradually lose water as it travels down the limb. The filtrate consequently has a tendency of becoming hypertonic to the plasma. The ascending limb of the Henle loop is impervious to water and permeable to the cations Potassium ions, Na+, and Chloride ions as well as urea to a lesser extent. Calcium, Magnesium, Chlorine, potassium, and Sodium are thereby reabsorbed in the thick ascending limb of the loop of Henle, resulting in the filtrate being less concentrated and hypotonic to blood plasma than in the descending limb.

Question 4: Why formation of urine is important?

Various processes of life are carried out by our bodies. Each of these processes causes the body to produce a large amount of waste. These wastes must be eliminated by our body or they could become hazardous to the body. Kidneys excrete these wastes through the production of urine. The kidneys create urine by filtering the blood to remove waste.

Question 5: What would be the reason urine is more concentrated in the case of summer?

Urine that is dark yellow implies that waste materials are excreted in lesser amounts of water and that the urine is concentrated. We perspire more in the summer to keep our body temperatures stable. As a result, our body loses more water. We have a higher risk of excreting yellowish urine in the heat if we don’t drink enough water.

Question 6: Different stages in case of formation of urine?

Previous
Meiosis - Definition, Stages, Function and Purpose
Next
Morphology of Earthworm - Definition, Classification, Diagram and Examples
Related Articles
1. Fundamental Concepts in Organic Reaction Mechanism
2. Mechanism of Breathing
3. Mechanism of Absorption of Elements
4. Mechanism of Enzymes Action
5. Mechanism Of Concentration Of The Filtrate
6. Formation of a Company
7. Public Deposits: Advantages and Disadvantages
8. What is Internal Trade?
9. Government Policy towards Public Sector since 1991
10. What are the different Sources of Finance?
Article Contributed By :