Mealy and Moore Machines in TOC

Moore Machines: Moore machines are finite state machines with output value and its output depends only on present state. It can be defined as (Q, q0, ∑, O, δ, λ) where: 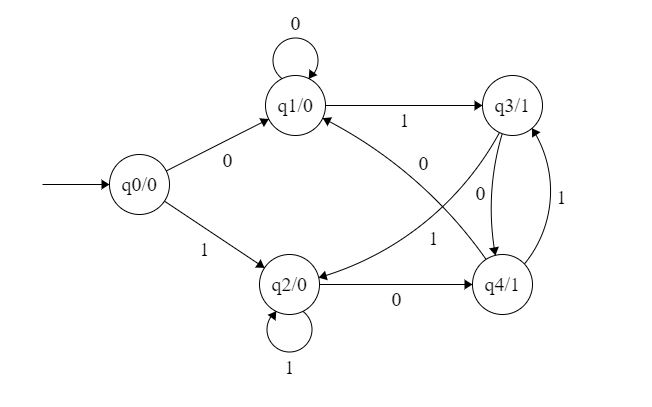 In the moore machine shown in Figure 1, the output is represented with each input state separated by /. The length of output for a moore machine is greater than input by 1.

Mealy Machines: Mealy machines are also finite state machines with output value and its output depends on present state and current input symbol. It can be defined as (Q, q0, ∑, O, δ, λ’) where: 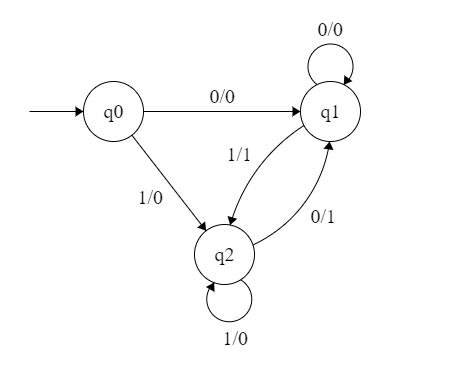 Conversion from Mealy to Moore Machine

Let us take the transition table of mealy machine shown in Figure 2.

Step 3. Create an empty moore machine with new generated state. For moore machine, Output will be associated to  each state irrespective of inputs.

This is the transition table of moore machine shown in Figure 1.

Step 2: Next state for each state can also be directly found from moore machine transition Table as:

This is the same mealy machine shown in Table 1. So we have converted mealy to moore machine and converted  back moore to mealy.

Example: The Finite state machine described by the following state diagram with A as starting state, where an arc label is x / y and x stands for 1-bit input and y stands for 2- bit output?

Outputs the sum of the present and the previous bits of the input.

Solution: Let us take different inputs and its output and check which option works:

As we can see, it is giving the binary sum of present and previous bit. For first bit, previous bit is taken as 0.

This article is contributed by Sonal Tuteja. Please write comments if you find anything incorrect, or you want to share more information about the topic discussed above