Given a positive integer N, the task is to find the largest positive number made up of distinct digits having the sum of its digits equal to N. If no such number exists, print “-1”. 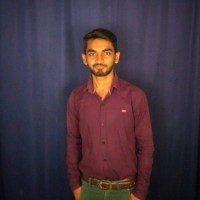