elements of a set is called an r-permutation. It is represented as

The above formula for

is a simple application of the product-rule.

elements from a set is called an r-combination. It is represented as

.
Since a combination is just a permutation without order, the number of

-permutation can be obtained by first obtaining the

-combination and then ordering the elements in each

-combination, which can be done in 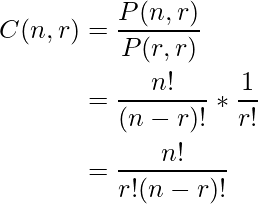 -combinations from a set of

elements if denoted by

be a non-negative integer. Then

Discrete Mathematics and its Applications, by Kenneth H Rosen