Prerequisite – Graph Theory Basics
Consider an electronic circuit having several nodes with connections between them. Is it possible to print that circuit on a single board such that none of the connections cross each other i.e. they do not overlap or intersect?
This question can be answered if we know about planarity of graphs.

Planarity – “A graph is said to be planar if it can be drawn on a plane without any edges crossing. Such a drawing is called a planar representation of the graph.”

Important Note – A graph may be planar even if it is drawn with crossings, because it may be possible to draw it in a different way without crossings.
For example consider the complete graph

and its two possible planar representations –

The planar representation of a graph splits the plane into regions. These regions are bounded by the edges except for one region that is unbounded. For example, consider the following graph ” 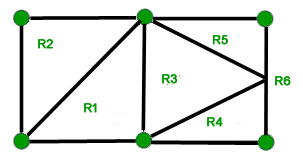 be a connected simple planar graph with

vertices. Then the number of regions

in the graph is equal to

where k is the no. of component in the graph..”

is a connected planar graph with

cannot have a vertex of degree exceeding 5.”

If you ever decide to create a map and need to color the parts of it optimally, feel lucky because graph theory is by your side. What is the maximum number of colors required to color the regions of a map? This question along with other similar ones have generated a lot of results in graph theory.
First, let us define the constraint of coloring in a formal way-

Coloring – “A coloring of a simple graph is the assignment of a color to each vertex of the graph such that no two adjacent vertices are assigned the same color.”

colors. But in some cases, the actual number of colors required could be less than this.

4 color Theorem – “The chromatic number of a planar graph is no greater than 4.”