Prerequisite: Predicates and Quantifiers Set 2, Propositional Equivalences Every Theorem in Mathematics, or any subject for that matter, is supported by underlying proofs. These proofs are nothing but a set of arguments that are conclusive evidence of the validity of the theory. The arguments are chained together using Rules of Inferences to deduce new statements and ultimately prove that the theorem is valid.

1. Argument – A sequence of statements, premises, that end with a conclusion.

2. Validity – A deductive argument is said to be valid if and only if it takes a form that makes it impossible for the premises to be true and the conclusion nevertheless to be false.

3. Fallacy – An incorrect reasoning or mistake which leads to invalid arguments.

Structure of an Argument : As defined, an argument is a sequence of statements called premises which end with a conclusion.

Similarly, we have Rules of Inference for quantified statements –

Let’s see how Rules of Inference can be used to deduce conclusions from given arguments or check the validity of a given argument. Example : Show that the hypotheses “It is not sunny this afternoon and it is colder than yesterday”, “We will go swimming only if it is sunny”, “If we do not go swimming, then we will take a canoe trip”, and “If we take a canoe trip, then we will be home by sunset” lead to the conclusion “We will be home by sunset”. The first step is to identify propositions and use propositional variables to represent them.

“It is sunny this afternoon”

“It is colder than yesterday”

“We will go swimming”

“We will take a canoe trip”

“We will be home by sunset” The hypotheses are –

To deduce the conclusion we must use Rules of Inference to construct a proof using the given hypotheses.

are complementary to each other. Removing them and joining the remaining clauses with a disjunction gives us-

We could skip the removal part and simply join the clauses to get the same resolvent.

This is also the Rule of Inference known as Resolution. Theorem – If

is the resolvent of

is also the logical consequence of

. The Resolution Principle – Given a set

of clauses, a (resolution) deduction of

is a finite sequence

of clauses such that each

is either a clause in

or a resolvent of clauses preceding

. We can use the resolution principle to check the validity of arguments or deduce conclusions from them. Other Rules of Inference have the same purpose, but Resolution is unique. It is complete by it’s own. You would need no other Rule of Inference to deduce the conclusion from the given argument. To do so, we first need to convert all the premises to clausal form. The next step is to apply the resolution Rule of Inference to them step by step until it cannot be applied any further. For example, consider that we have the following premises –

The first step is to convert them to clausal form –

Note:Implications can also be visualised on octagon as, 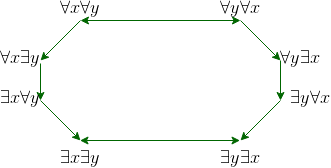 It shows how implication changes on changing order of their exists and for all symbols. GATE CS Corner Questions Practicing the following questions will help you test your knowledge. All questions have been asked in GATE in previous years or in GATE Mock Tests. It is highly recommended that you practice them. 1. GATE CS 2004, Question 70 2. GATE CS 2015 Set-2, Question 13 References- Rules of Inference – Simon Fraser University Rules of Inference – Wikipedia Fallacy – Wikipedia Book – Discrete Mathematics and Its Applications by Kenneth Rosen This article is contributed by Chirag Manwani. If you like GeeksforGeeks and would like to contribute, you can also write an article using write.geeksforgeeks.org or mail your article to review-team@geeksforgeeks.org. See your article appearing on the GeeksforGeeks main page and help other Geeks. Please write comments if you find anything incorrect, or you want to share more information about the topic discussed above.