Material Design Components (MDC Android) offers designers and developers a way to implement Material Design in their Android applications. Developed by a core team of engineers and UX designers at Google, these components enable a reliable development workflow to build beautiful and functional Android applications. Material design in Android is one of the key features that attracts and engages the customer towards the application. This is a special type of design, which is guided by Google. So in this article, it has been demonstrated how to use Navigation Rail in android. Have a look at the following image to get an overview of the discussion.

Note that while syncing your project you need to be connected to the network and make sure that you are adding the dependency to the app-level Gradle file as shown below.

Navigation rail provides movement between the primary screens or destination of the application. This basically is a side navigation component that displays a minimum of three to a maximum of seven destinations. Each destination has an associated icon and label. The navigation rail is used for larger screens like tablets and desktop screens.

When to Use Navigation Rail?

The Navigation Rail is placed on the left side of the screen for Left To Right (LTR) languages and right for Right To Left (RTL) languages.

Anatomy of the Navigation Rail 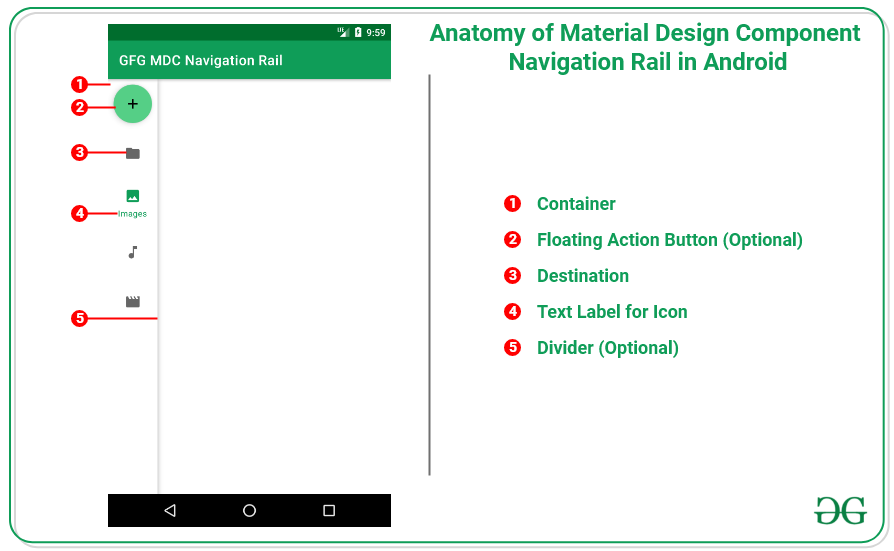 Step 1: Creating menu with icons for the Navigation Rail

The menu for Navigation Rail contains four sample items files, images, music, videos also associated icons for each label. To implement the same invoke the following code inside the navigation_rail_menu.xml file, under the menu folder.

The main and only layout of the file contains the Navigation Rail and attaching the navigation_rail_menu.xml and navigation_rail_fab to it. To implement the same invoke the following code inside the activity_main.xml file.