Manchester encoding is a synchronous clock encoding technique used by the physical layer of the Open System Interconnection [OSI] to encode the clock and data of a synchronous bit stream.  The idea of RZ and the idea of-L are combined in manchester

Different encoding techniques are used in data communication to ensure data security and transmission speed. Manchester encoding is an example of digital encoding. Because each data bit length is defined by default, it differs from other digital encoding schemes. The bit state is defined by the direction of the transition. Bit status is represented in various ways by different systems, although most systems use 1 bit for low to high transitions and 0 bit for high to low transitions.

In manchester duration of a bit is divided into two halves. The voltage remains the same at one level during the first half & moves to the other level.The transition at the middle of the bit provides synchronization.Differential Manchester,on the other hand,combines the idea of RZ and NRZ-I. There is always a transition at the middle of the bit, but the bit values are determined at the beginning of the bit. if next bit is zero there is transition if next bit is 1 there is none.

The binary data to be transmitted over the cable are not sent as NRZ [Non-return-to-zero].

Non-return-to-zero [NRZ] –
NRZ code’s voltage level is constant during a bit interval. When there is a long sequence of 0s and 1s, there is a problem at the receiving end. The problem is that the synchronization is lost due to a lack of transmissions.
It is of 2 types: 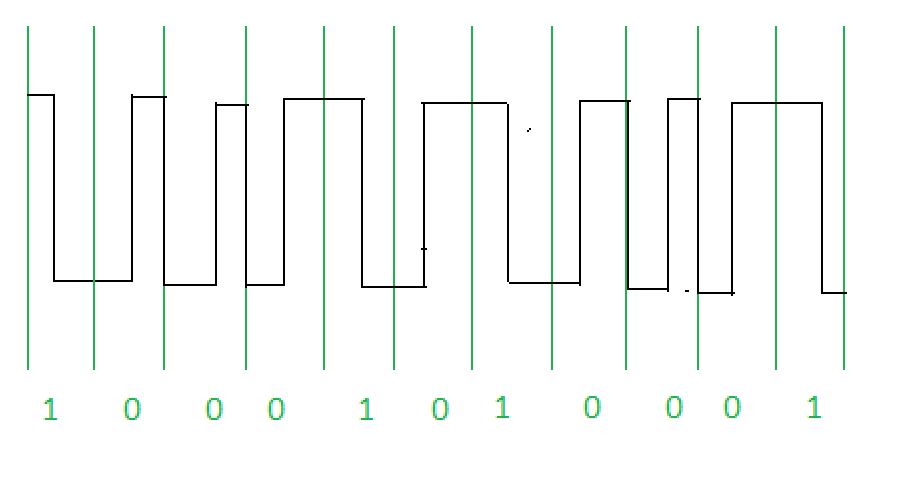