Humans are sexually reproducing and viviparous organisms. The reproductive events in humans include the formation of gametes (gametogenesis), transfer of sperms into the female genital tract (insemination), and fusion of male and female gametes (fertilization) leading to the formation of zygote. This is followed by the formation of the development of blastocyst and its attachment to the uterine wall.(implementation), embryonic development (gestation) and delivery of the body (parturition). Reproductive events occur after puberty. There is the remarkable differences between the reproductive events in males and females. The reproductive system of both the sexes consists of organs that can be distinguished into primary organs which produce gametes and sex hormones and secondary organs which neither produce gametes nor secrete sex hormones but perform important functions in the condition of gametes sex organs.

The male reproductive system is located in the pelvic region. It includes a pair of testes along the accessory ducts, glands, and external genitalia. 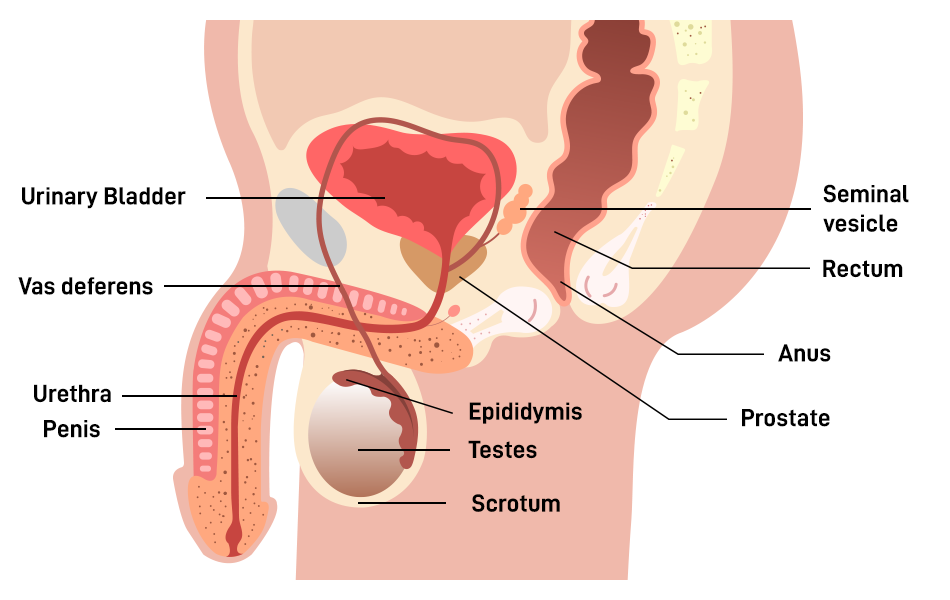 The testes, or testicles, are a pair of oval pinkish male reproductive primary sex organs suspended outside the domanial cavity within a pouch called the Scrotum. The scrotum helps in maintaining the low temperature of the testes (2-2.5 C lower than the normal internal body temperature) necessary for spermatogenesis. The scrotum is divided internally into right and left scrotal sacs by a muscular partition namely septum scroti. Each scrotal sac encloses one testis. Externally in between the two scrotal sacs, a vertical marking is present Called Raphael. The cavity of the scrotal sac is connected to the abdominal cavity through the inguinal canal. The testes descend into the scrotum just before birth ( at the age of 280 days). The condition in which the testes do not descend into the scrotum is called cryptorchidism. Testes are held in position in the scrotal sac by the gubernaculum, a fibrous cord that connects the testis with the bottom of the scrotal sacs. A spermatic cord, formed by the Vas deferens, nerves, blood vessels, lymph, lymph vessels, and cremaster muscles runs from the abdominal wall, sown to each testis, through the inguinal canal. In adults, each testis is with a length of 4 to 5 cm and a width of 2 to 3 cm. Each testis is covered by three layers

Each seminiferous tubule is lined on its inside by two types of cells Called Male germ cells (spermatogonia) and Sertoli cells (sustencular cells). The spermatogonia produce the primary spermatocytes which undergo meiotic division finally leading to sperm formation. Sertoli cells provide nutrition to the spermatozoa and also produce a hormone called inhibin, which inhibits the secretion of FSH. To the apical surface of Sertoli cells, facing the lumen of the seminiferous tubule many spermatocytes and spermatids are attached. The regions outside the seminiferous tubules, called interstitial spaces, and contain the Leydig or Leydig cells. Leydig cells produce androgens, the most important of which is testosterone. Testosterone controls the development of secondary sexual characters and spermatogenesis.

The penis and the scrotum constitute the male external genitalia. The penis serves as a urinal duct and also the intermittent organ that transfers spermatozoa to the vagina of a female. The human penis is made up of three columns of spongy tissues: two upper corpora cavernosa in the dorsal aspect and one corpus spongiosum on the ventral side. Corpora cavernosa continued as glans penis ( the enlarged and bulbous end of the penis) at the top of the penis. Glans penis is covered by a loose fold of skin (foreskin) called prepuce. The urethra traverses the corpus spongiosum, and its opening called the urethral meatus lies at the tip of the glans penis. Skin and a subcutaneous layer of areolar tissue enclose all three columns of the penis. The corpora cavernosa consists of a special tissue with spaces that are filled with blood. They help in Erections of the penis to facilitate insemination.

Erection of the penis is caused by a rush of arterial blood into the empty sinuses of its spongy tissues on sexual excitement. As the spongy tissue distends, it compresses the veins, inhibiting the flow of blood out of the tissue. The filling of tissue with blood is Called vasocongestion. Erection of the penis is caused by parasympathetic impulses. The release of semen into the proximal part of the urethra by contraction of reproductive glands and ducts is called emission. Rhythmic, wavelike contractions of the muscles at the base of the penis cause forceful discharge of semen into the vagina. This is called ejaculation. Emission and ejaculation are caused by sympathetic impulses.

The Vasa efferentia leaves the testis and opens into a narrow, long tightly coiled tube called epididymis located along the posterior surface of each testis. It is differentiated into three regions upper caput epididymis, middle corpus epididymis and. Lower cauda epididymis. The caput epididymis receives spermatozoa via the Vasa efferentia of the mediastinum testis (a mass of connective tissue at the back of the testis that encloses the rete testis). Cauda epididymis is connected with Vas deferens. The epididymis is lined by Pseudostratified non-ciliated epithelium and secretes nutrients for the maturation of spermatozoa. The epididymis provides storage space for the sperms and gives the sperms time to mature.

The Vasa deferentia or ductus deferens is a long narrow, muscular tube. The mucosa of the ductus deferens consists of Pseudostratified columnar epithelium and lamina propria ( areolar connective tissue). It starts from the tail of the epididymis, passes through the inguinal canal into the abdomen, and loops over the urinary bladder. At the end of Vas deferens a spindle-like structure, ampulla is present. Sperms are temporarily stored in the ampulla. It receives a duct from the seminal vesicle. The Vas deferens and the duct of the seminal vesicle unite to form a short muscular ejaculatory duct/ductus ejaculators. These ducts store and transport the sperms from the testis to the outside through the urethra. The two ejaculatory ducts converge in the center of the prostate and open into the urethra.

In males, the urethra is the shared (common) terminal duct of the reproductive and urinary systems. The urethra originates from the neck of the urinary bladder and extends through the penis to its external opening called the urethral meatus. The urethra of male human beings is differentiated into the urinary urethra, prostatic urethra, membranous urethra, and penile urethra.

The seminal vesicles are a pair of simple tubular glands present poster inferior to the urinary bladder in the pelvis. Each seminal vesicle opens into the corresponding Vas deferens, where the Vas deferens enter the prostate gland. The secretion of the seminal vesicles constitutes about 60 percent of the volume of seminal fluid. It is an alkaline, viscous fluid that contains fructose, proteins, citric acid, inorganic phosphorus, potassium, and prostaglandins. Once this fluid joins the sperm in the ejaculatory duct, fructose acts as the main energy source for the sperm outside the body.

The prostate gland is located directly beneath the urinary bladder. The gland surrounds the prostatic urethra and sends its secretions through several prostatic ducts. The prostate contributes 15 – 30%  of the semen. The prostatic secretion is clear, slightly acidic and activates the spermatozoa, and provides nutrition.

The Bulbourethral glands, also called Cowper’s glands are located beneath the prostate gland at the beginning of the internal portion of the penis. They add an alkaline fluid to semen during the process of ejaculation. The fluid secreted by these glands lubricates the urethra. It is also thought to function as a flushing agent that washes out the acidic urinary residues that may remain in the urethra before the semen is ejaculated.

Question 1: What is meant by the male reproductive system?

Question 2:  What are the main important parts of the male reproductive system?

Question 3:  What are the main two important functions of the male reproductive system?

Question 4: What is meant by Ductus ejaculations?

A channel through which semen is discharged explicitly: both of the matched pipes in the human male that are framed by the intersection of the conduit from the original vesicle with the vas deferens and that pass through the prostate to exhaust into the urethra.

Question 5: Where the sperms stored in?

Sperm creation in the testicles happens in wound structures called seminiferous tubules. Along with the highest point of every gonad is the epididymis. This is a cord-like structure where the sperm mature and are put away.

Question 6: What is the structure of testis?

Males have two testicles that are suspended in a sac-like construction called the scrotum. The testicles are made of curled tubules called the seminiferous tubules. These tubules go on as vas efferent which then, at that point, structure the epididymis and go on as vas deferens. The terminal piece of vas deferens is known as the ampulla.