Machine Independent code optimization tries to make the intermediate code more efficient by transforming a section of code that doesn’t involve hardware components like CPU registers or any absolute memory location. Generally, it optimizes code by eliminating redundancies, reducing the number of lines in code, eliminating useless code or reducing the frequency of repeated code. Thus can be used on any processor irrespective of machine specifications.

Function Preserving optimizations deals with the code in a given function in an attempt of reducing the computational time. It can be achieved by following methods:

A common subexpression is the one which was computed and doesn’t change after it last computation, but is often repeated in the program. The compiler evaluates its value even if it does not change. Such evaluations result in wastage of resources and time. Thus it better be eliminated. Consider an example:

It is troublesome if a common subexpression is often repeated in a program. Thus it needs to be eliminated.

Dead code is a program snippet that is never executed or never reached in a program. It is a code that can be efficiently removed from the program without affecting any other part of the program. In case, a value is obtained and never used in the future, it is also regarded as dead code. Consider the below dead code:

Another example of dead code is assign a value to a variable and changing that value just before using it. The previous value assignment statement is dead code. Such dead code needs to be deleted in order to achieve optimization.

Another kind of optimization, loop optimization deals with reducing the time a program spends inside a loop.

The program spends most of its time inside the loops. Thus the loops determine the time complexity of the program. So, in order to get an optimal and efficient code, loop optimization is required. In order to apply loop optimization, we first need to detect the loop using control flow analysis with the help of program flow graph. A cycle in a program flow graph will indicate presence of a loop. Note that, the code from Intermediate code Generation phase which is in three-address format is given as input to the optimization phase. It is difficult to identify loops in such a format, thus a program flow graph is required.

The program flow graph consists of basic blocks, which is nothing but the code divided into parts or blocks and show the execution flow of the code, 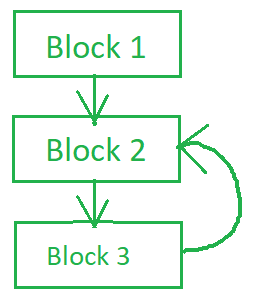 The cycle in the above graph shows a presence of loop from block 2 to block3.

Once the loops are detected following Loop Optimization techniques can be applied :

It applies to the concept that a loop runs for least possible lines of code. It can be achieved by following methods:

As in above example , an unrolled loop is more efficient than the previous loop.

Combining the loops that carry out the same operations is called as loop jamming.

Thus, instead of executing same loops twice, that operation can be done by executing the loop only once.

A program might contain some trivial algebraic expressions that do not result in any useful computation or change of value. Such lines of code can be eliminated so the compiler doesn’t waste time evaluating it. For example,

These statements do not result in any useful computations. Such code may seem harmless, but when used inside any loops they keep on being evaluated by compiler. Thus it is best to eliminate them.

It suggests replacing a costly operation like multiplication with a cheaper one.

It is an important optimization for programs where array accesses occur within loops and should be used with integer operands only.

It may happen, that a specific expression is repeated in a code many times. This expression is redundant to code because we may evaluate it once and substitute its next occurrence with its evaluated value. This substitution is nothing but redundancy elimination. A simple example is given below