Multiple Access with Collision Avoidance for Wireless (MACAW) is a medium access control (MAC) protocol broadly utilized in ad hoc network systems. Besides, it is the establishment of numerous other MAC protocols utilized in wireless sensor systems (WSN).

The IEEE 802.11 RTS/CTS system is received from this protocol. It utilizes RTS-CTS-DS-DATA-ACK frame succession for moving information, once in a while went before by a RTS-RRTS frame arrangement, in view to give answer for the concealed node problem. Although protocol dependent on MACAW, are S-MAC, MACAW doesn’t utilize carrier sense.

Example :
A successful transmission in case of MACAW will look like : 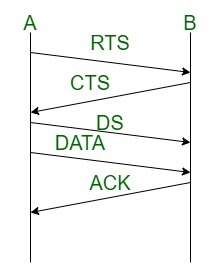 A successful transmission in case of MACAW with RRTS will look like : 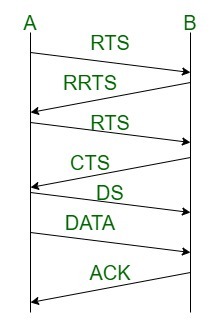