A virus is an infectious submicroscopic organism that only reproduces inside living cells. All living things, including plants, animals, and microbes like bacteria and archaea, are susceptible to virus infection. Since Dmitri Ivanovsky’s 1892 publication revealing a non-bacterial pathogen infecting tobacco plants and Martinus Beijerinck’s 1898 discovery of the tobacco mosaic virus, more than 9,000 virus species—out of the millions of different types of viruses in the environment—have been documented in detail. Viruses are the most common sort of living organism and can be found in practically all ecosystems on Earth. Virology is the study of viruses; it is a branch of microbiology.

A virus known as a bacteriophage or phage only infects and replicates inside the bodies of bacteria. 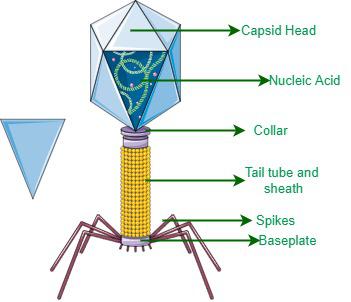 The virus enters the host cell to reproduce, during which time the virus leads to various forms of infection of the host cell. The overall process of viruses entering, replicating, and exiting host cells includes the life cycle of the virus. Bacteriophages, like all viruses, follow a similar trajectory, where viruses enter the bacterial host cell to replicate. There are two types of life cycles that differ in the mechanism of DNA replication, where one type of viral DNA is incorporated into the host DNA but in another type of cycle, the DNA replicates the host DNA separately. These life cycles can occur independently or alternately in different phages. 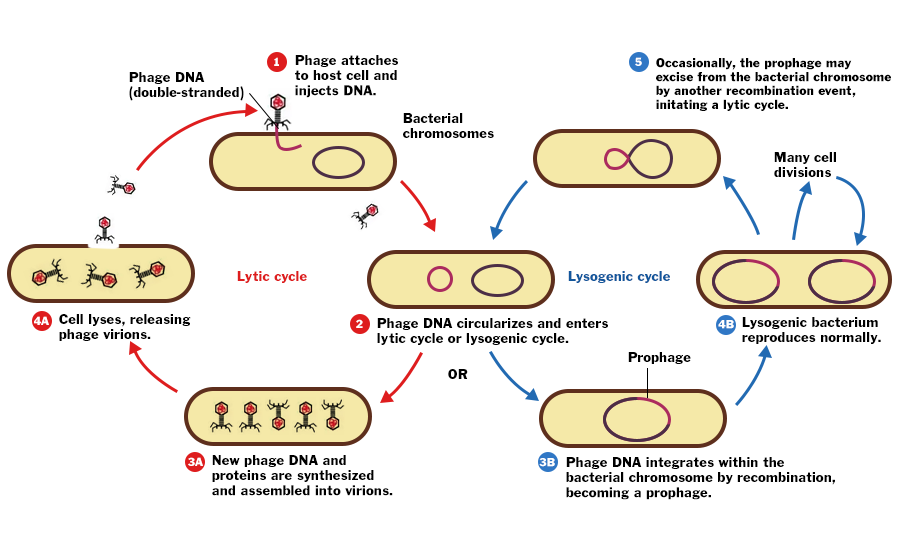 The lysogenic life cycle process  occurs in the following steps:

Bacteriophages are viruses that infect and multiply in bacteria. Temperate phages (such as lambda phage) can replicate using both lytic and lysogenic cycles.

Question 2: What triggers lysogenic to lytic?

When prophage-bearing bacteria are exposed to stressors such as UV light,  nutrient deficiencies, and chemicals such as mitomycin C, prophages are naturally extracted from the host genome and can enter the lytic cycle in a process called induction.

Question 3: How do viruses reproduce the lysogenic cycle?

These viruses break down or lyse cells and spread to other cells to continue the cycle. Similar to the lytic cycle, in the lysogenic cycle the virus attaches to  host cells and injects its DNA. From there, the viral DNA integrates into the host’s DNA and  cells.

Question 4: What is the advantage of a lysogenic cycle?

The lysogenic cycle allows phages to replicate without killing the host.

Question 5: Which stage of the virus occurs first?

Question 6: How are lysogenic viruses different from lytic viruses?