A local Area Network (LAN) is a data communication network connecting various terminals or computers within a building or limited geographical area. The connection among the devices could be wired or wireless. Ethernet, Token Ring and Wireless LAN using IEEE 802.11 are examples of standard LAN technologies.
LAN has the following topologies:

Ethernet:-
Ethernet is the most widely used LAN technology, which is defined under IEEE standards 802.3. The reason behind its wide usability is Ethernet is easy to understand, implement, maintain, and allows low-cost network implementation. Also, Ethernet offers flexibility in terms of topologies that are allowed. Ethernet generally uses Bus Topology. Ethernet operates in two layers of the OSI model, Physical Layer, and Data Link Layer. For Ethernet, the protocol data unit is Frame since we mainly deal with DLL. In order to handle collision, the Access control mechanism used in Ethernet is CSMA/CD.
Manchester Encoding Technique is used in Ethernet.

Since we are talking about IEEE 802.3 standard Ethernet, therefore, 0 is expressed by a high-to-low transition, a 1 by the low-to-high transition. In both Manchester Encoding and Differential Manchester, the Encoding Baud rate is double of bit rate.

Efficiency: An Ethernet cable, such as Cat6, consumes less electricity, even less than a wifi connection. As a result, these ethernet cables are thought to be the most energy-efficient.

Good data transfer quality: Because it is resistant to noise, the information transferred is of high quality.

Ethernet LANs consist of network nodes and interconnecting media or links. The network nodes can be of two types:
Data Terminal Equipment (DTE):- Generally, DTEs are the end devices that convert the user information into signals or reconvert the received signals. DTEs devices are: personal computers, workstations, file servers or print servers also referred to as end stations. These devices are either the source or the destination of data frames. The data terminal equipment may be a single piece of equipment or multiple pieces of equipment that are interconnected and perform all the required functions to allow the user to communicate. A user can interact with DTE or DTE may be a user.

Data Communication Equipment (DCE):- DCEs are the intermediate network devices that receive and forward frames across the network. They may be either standalone devices such as repeaters, network switches, routers, or maybe communications interface units such as interface cards and modems. The DCE performs functions such as signal conversion, coding, and maybe a part of the DTE or intermediate equipment.

Currently, these data rates are defined for operation over optical fibres and twisted-pair cables:
i) Fast Ethernet
Fast Ethernet refers to an Ethernet network that can transfer data at a rate of 100 Mbit/s.

ALOHA
The Aloha protocol was designed as part of a project at the University of Hawaii. It provided data transmission between computers on several of the Hawaiian Islands involving packet radio networks. Aloha is a multiple access protocol at the data link layer and proposes how multiple terminals access the medium without interference or collision.

There are two different versions of ALOHA:
1. Pure Aloha
Pure Aloha is an un-slotted, decentralized, and simple to implement the protocol. In pure ALOHA, the stations simply transmit frames whenever they want data to send. It does not check whether the channel is busy or not before transmitting. In case, two or more stations transmit simultaneously, the collision occurs and frames are destroyed. Whenever any station transmits a frame, it expects acknowledgement from the receiver. If it is not received within a specified time, the station assumes that the frame or acknowledgement has been destroyed. Then, the station waits for a random amount of time and sends the frame again. This randomness helps in avoiding more collisions. This scheme works well in small networks where the load is not much. But in largely loaded networks, this scheme fails poorly. This led to the development of Slotted Aloha.
To assure pure aloha: Its throughput and rate of transmission of the frame to be predicted.
For that to make some assumptions:
i) All the frames should be the same length.
ii) Stations can not generate frames while transmitting or trying to transmit frames.
iii)The population of stations attempts to transmit (both new frames and old frames that collided) according to a Poisson distribution. 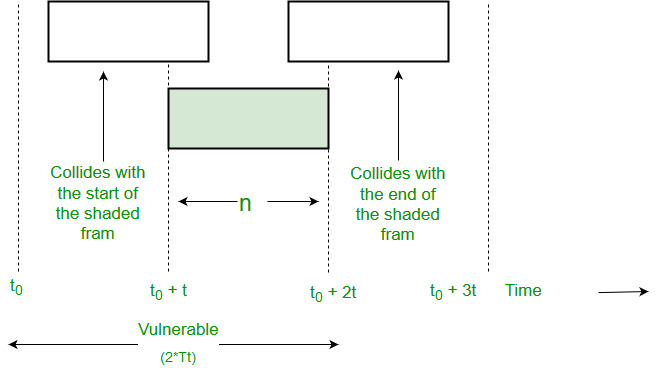 The efficiency of Pure ALOHA:

Collision is possible for only the current slot. Therefore, Vulnerable Time is Tt.

The efficiency of Slotted ALOHA:

This article is contributed by Sheena Kohli and Abhishek Agrawal